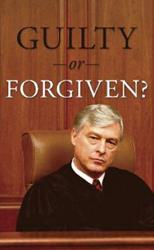 “How do you plead?” the judge asked. I swallowed. I hadn’t realized how difficult this would be. “Guilty,” I answered. Guilty. We have all felt guilty at one time or another. More than that, we have all been guilty.

“How do you plead?” the judge asked.

I swallowed. I hadn’t realized how difficult this would be. “Guilty,” I answered.

I would have liked to explain, to say that I am usually very law-abiding, to show how circumstances were different this time. But I knew the judge had probably heard every excuse there was. Mine would be no different. So I quietly accepted the sentence and paid my fine.

Guilty. We have all felt guilty at one time or another. More than that, we have all been guilty.

What is this thing called guilt, anyway?

For one thing, it is a feeling. The child who raids the cookie jar feels guilt—you can tell because he hides to eat the cookie.

When you or I do wrong—when we break one of God’s laws—we feel guilt too.

And with good reason: we are guilty. In other words, guilt is more than the feeling that comes from knowing we have done wrong; it is the state of having done wrong.

We all know what it is like to be guilty. Everybody has made wrong choices— sometimes costly, sometimes embarrassing, sometimes painful, and sometimes very insignificant. The question of who is guilty, however, goes deeper than merely having made unwise choices. It goes directly into our hearts and our very makeup. We have a sinful nature. We have chosen to rebel against God’s authority, to go our own way, and to follow our own desires. In our rebellion, we are guilty before God and stand condemned. No one can stand before the holy, just, almighty God and proclaim himself innocent of self-rule and sin. God has told us in the Bible, “There is none righteous, no, not one” (Romans 3:10). “For all have sinned, and come short of the glory of God” (Romans 3:23).

What about guilt feelings?

God gave each of us a conscience to govern our lives. When we violate God’s will, our conscience brings our sin and the resultant condemnation to our attention. This awareness of guilt results in feelings of guilt. We feel guilty because we are guilty.

Guilt feelings, then, are a blessing from God. Imagine if, when we sinned, we felt no guilt. We might have continued in wrongdoing and condemnation, not realizing we had sinned. The feeling of guilt does for the soul what pain does for the body—it warns us of a problem and urges us to do something about it.

How people attempt to deal with guilt

Guilt is a hard master. It eats at the memory, torments the mind, and drives people mad. Some people seem to suppress guilt feelings easily, and others go to great extremes to rid themselves of guilt. Everyone seeks some way to alleviate the painful weight of guilt.

Some try to handle guilt by doing penance: Surely if I deny myself of something I especially enjoy, I’ll make up for my sin, and God will forgive me. Doing penance never brings real peace. King David, struggling under the guilt of adultery and murder, realized this when he said, “Thou desirest not sacrifice; else would I give it” (Psalm 51:16).

Some try doing good deeds to make up for their sins—giving to charities, volunteering for community services, or helping their neighbors. They hope their good works will outweigh the bad on the judgment day. That doesn’t work either. God’s Word says, “Not by works of righteousness which we have done, but according to his mercy he saved us” (Titus 3:5). No amount of good works will wipe out guilt.

Some people spend thousands of dollars on counseling in an attempt to eradicate their guilt. They are told that guilt is not real, that guilt feelings are the result of their upbringing, and that if they learn to ignore guilt, their problem will be solved. And plenty of people have convinced themselves that they are not guilty. The guilt feelings shrink to hidden shadows in their hearts. But the guilt remains.

If you have dulled your conscience, you may be able to do things you know are wrong and not feel guilty. But that does not erase your guilt. Until you repent, you are still guilty of living in defiance of God’s authority, and the penalty is still in place—eternal death. Just because you do not feel guilty does not mean that guilt is not doing its terrible work in your being.

Do not let anyone convince you that you can do wrong and get by. God says clearly, “Let no man deceive you with vain words: for because of these things [sins] cometh the wrath of God upon the children of disobedience” (Ephesians 5:6).

Is there a way to deal with guilt successfully?

There is! Listen to what God’s Word says.

“Repent, and be baptized every one of you in the name of Jesus Christ for the remission of sins” (Acts 2:38).

“If we confess our sins, he [God] is faithful and just to forgive us our sins, and to cleanse us from all unrighteousness” (1 John 1:9).

To repent means to turn around in sorrow. In sin, we have been going our own way. We must turn around and begin walking God’s way.

To believe in Jesus means we must acknowledge that He is God’s provision for our sins. We were guilty and condemned to die. But God loved us enough to make a way for us to be forgiven. He did this by sending His perfect Son to die on the cross as a sacrifice for our sins. “For Christ also hath once suffered for sins, the just for the unjust, that he might bring us to God” (1 Peter 3:18).

God raised His sinless Son from the dead and exalted Him above all others. Jesus is now seated at the right hand of God and reigning in the hearts of those who love and trust Him. In His great mercy, Jesus still pleads with those living in rebellion to surrender their lives to Him and accept His pardon.

This is the Gospel—the Good News—to you: “That if thou shalt confess with thy mouth the Lord Jesus, and shalt believe in thine heart that God hath raised him from the dead, thou shalt be saved” (Romans 10:9).

To confess means to acknowledge what is true. To confess our sins means to tell God truthfully in what ways we have violated His law. When we confess our sinfulness and ask God to forgive us, He deletes our guilt. God’s forgiveness takes care of the guilt problem. No longer are we guilty before Him. We are forgiven! “As far as the east is from the west, so far hath he removed our transgressions [sins] from us” (Psalm 103:12).

After forgiveness, then what?

No more guilt! “We have peace with God through our Lord Jesus Christ” (Romans 5:1). Being in a right relationship with God results in a glorious peace of mind.

No more living in sin. “No one who is born of God will continue sinning knowingly, because God’s nature dwells in him and he cannot practice sinning because he is born of God” (1 John 3:9, paraphrased). When God forgives, He cleans us up, gives us His Holy Spirit, and puts in us His new life. This life of God gives us the desire and the power to live according to His will.

No more fear. Jesus delivers “them who through fear of death were all their lifetime subject to bondage” (Hebrews 2:15). We naturally fear death because we know that after death comes judgment. “It is appointed unto men once to die, but after this the judgment” (Hebrews 9:27).

On Judgment Day, you will stand before an all holy, completely just God, who cannot allow sin in His presence.

On that day, your verdict and sentence will not involve a small fine, as does a minor traffic offense. It will involve your eternal destiny—where you will be forever.

What will the verdict be?