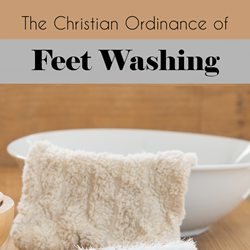 The Christian Ordinance of Feet Washing

Washing feet? at church?? Did Jesus really mean for people in the 21st century to do THAT? A study of our Lord's example in John 13, and the lessons He taught of spiritual cleansing, humble service, sacrificial love and equality, that will still bless obedient Christians who wash feet today.

For the disciples in the upper room, feet washing was not new. They knew the old custom of welcoming travelers by providing water to wash their feet. They had read the Bible stories of Abraham, Lot, Laban, Joseph’s steward, and the old man in Gibeah offering this service to their guests (Gen 18:4; 19:2; 24:32; 43:24; Jude 19:21). They knew that the job of washing feet was often assigned to slaves and was considered very lowly. Abigail implies this when she “bowed herself on her face to the earth, and said, Behold, let thine handmaid be a servant to wash the feet of the servants of my lord” (1Sa 25:41).

In the disciples’ day, the custom was still alive. For a host to offer water for feet washing was only proper hospitality, as indicated by Jesus’ rebuke to Simon the Pharisee (Luke 7:44).

The disciples were also familiar with the ceremonial feet washing in the Old Testament law, how Aaron and his sons were to wash their hands and feet in the brass laver whenever they entered the tabernacle or approached the altar to offer sacrifices (Ex 30:17-21; 40:30-32). God’s “lest ye die” shows the importance He placed upon this washing.

So, feet washing was not new to the disciples. But what Jesus did that night in the upper room was different from any feet washing they had known.

They were still at the supper table. Just before, they had disputed about which of them would be greatest. Jesus silenced their argument with these humbling words: “The kings of the Gentiles exercise lordship over them; and they that exercise authority upon them are called benefactors. But ye shall not be so: but he that is greatest among you, let him be as the younger; and he that is chief, as he that doth serve. For whether is greater, he that sitteth at meat, or he that serveth? is not he that sitteth at meat? but I am among you as he that serveth” (Luke 22:25-27).

Then He clinched this teaching with a startling object lesson. “He riseth from supper, and laid aside his garments; and took a towel, and girded himself. After that, he poureth water into a basin, and began to wash the disciples’ feet, and to wipe them with the towel wherewith he was girded” (John 13:4-5).

This towel was a linen cloth or apron such as servants wore. Contrary to custom, the great Master was taking upon Himself the form of a servant! It seemed so wrong. Impetuous Peter protested when Jesus approached him. “Lord, dost thou wash my feet?”

Jesus patiently answered, “What I do thou knowest not now, but thou shalt know hereafter.”

Maintaining his show of humility, Peter persisted, “Thou shalt never wash my feet.” This time the answer was stern: “If I wash thee not, thou hast no part with me.” Peter realized this was more than just a new twist on an old custom. And it was even more than an object lesson. Like the ancient ceremonial washing in the laver, this washing in the Lord’s basin was required for acceptance with Him. Peter gave in. “Lord, not my feet only, but also my hands and my head.”

Once more, Jesus gently corrected Peter. “He that is washed needeth not save to wash his feet, but is clean every whit: and ye are clean, but not all. For he knew who should betray him; therefore said he, Ye are not all clean” (John 13:10-11).

The disciples may not have understood this immediately, but when Jesus pronounced them clean except for Judas, He was speaking of spiritual, not physical cleanliness. And this washing was not merely a custom, to clean and refresh the feet; but a ceremony, to symbolize a heart and spiritual walk that Christ has cleansed.

“So after he had washed their feet, and had taken his garments, and was set down again, he said unto them, Know ye what I have done to you? Ye call me Master and Lord: and ye say well; for so I am. If I then, your Lord and Master, have washed your feet; ye also ought to wash one another’s feet. For I have given you an example, that ye should do as I have done to you” (John 13:12-15).

This word “ought” is forceful, meaning “to be under obligation, indebted” (Strong’s). Jesus’ teaching was plain; they were to wash each other’s feet literally. His meaning was also clear: “Since I as Lord and Master humbled Myself to serve you, surely you can, and must, humble yourselves to serve each other.”

Then He pronounced a blessing on obedience. “If ye know these things, happy are ye if ye do them” (John 13:17). “These things” were what He had just taught them (in John 13 and Luke 22): the literal ordinance of feet washing, along with the spirit behind it, of seeking humble service rather than greatness.

At first, the disciples did not comprehend the depth of this simple ordinance. But Jesus’ prophecy, “Thou shalt know hereafter,” came true in the immediate hours and the days that followed. In His suffering and death, He showed them by example the profound meanings of feet washing. And as the Holy Spirit infilled them and brought Christ’s words to their remembrance (John 14:26), they learned the lessons He had so vividly taught in the upper room that night.

First, it was a lesson in spiritual cleansing. Shortly after washing their feet, He gave His blood to wash away their sins. By this, He could declare them “clean every whit,” fit them to “have part with Him,” and unite them in fellowship with each other. Second, it was a lesson in humble service. His condescension to wash their feet was only a step on His path from heaven to the death of the cross. This became clear to Peter afterward. No doubt the memory of Jesus washing his feet was permanently burned into his mind. When he wrote, “All of you be subject one to another, and be clothed with humility” (1Pe 5:5), he used a word that means “to wear the apron as being a badge of servitude” (Strong’s). Was he thinking of the apron Jesus wore that night? Peter had learned his lesson well.

Third, it was a lesson in sacrificial love. Love is what motivated this lesson in the first place. “Now before the feast of the Passover, when Jesus knew that his hour was come that he should depart out of this world unto the Father, having loved his own which were in the world, he loved them unto the end” (John 13:1). In His hour of crisis, His parting words were to show them His love and to teach them to love. They were weak; He had repeatedly rebuked them for their little faith and their contentions. That very night they would forsake Him, and Peter would deny Him. Yet despite their failings, He called them His own, loved them to the end, and lay down His life for them.

So, by Christ’s clear teaching and powerful example, the practice and principles of feet washing became part of being His disciples. According to First Timothy 5:10 and early church writings, the custom and ceremony continued.

However, as footwear and modes of transportation changed, the custom died out. Eventually, so did the ceremony in most churches. Many today are teaching that Jesus did not intend His words to be taken literally. But they do not object to literally eating the bread and drinking the cup, although Jesus instituted both communion and feet washing on the same occasion.

The Dortrecht Confession of Faith, adopted in 1632, contains this article:

Of the Washing of the Saints’ Feet

We also confess a washing of the saints’ feet, as the Lord Christ not only instituted, enjoined and commanded it, but Himself, although He was their Lord and Master, washed His apostles’ feet, thereby giving an example that they should likewise wash one another’s feet, and do as He had done unto them; which they accordingly, from this time on, taught believers to observe, as a sign of true humility, and, especially, to remember by this feet washing, the true washing, whereby we are washed through His precious blood and made pure after the soul. (John 13:4-17; 1Ti 5:10).

The 1921 Garden City Confession of Faith, which is reprinted in our Decrees, includes this statement in Article XII on ordinances: “that feet washing as an ordinance should be literally observed by all believers.”

To Christ’s disciples today, His lessons on feet washing are still as relevant as ever.

As we wash each other’s feet, we are learning our Master’s lesson on spiritual cleansing. We commemorate the fellowship we have with each other as blood washed saints. We cannot wash away each other’s sins; only Christ can do that. But we have a role in helping each other stay clean in our spiritual walk. This means looking out for each other spiritually, giving loving encouragement and sometimes a loving tap on the shoulder. By washing my brother’s feet, I say, “I am willing to let you check my feet and help me keep them clean. I am also willing to check your feet and help you keep them clean.”

As we wash feet, we are learning our Master’s lesson on humble service. Kneeling on the floor puts us all on the same level—pastor and layman, rich and poor, employer and employee, superintendent and janitor, farmer and schoolteacher, old and young. It’s a beautiful sight. Together we are committing ourselves to help each other, both with spiritual and material needs. By washing my brother’s feet, I am humbling myself to serve him and to let him serve me.

As we wash feet, we are learning our Master’s lesson on sacrificial love. By washing each other’s imperfect feet, warts and all, we declare a Christlike love that accepts each brother despite his human weaknesses. Further, in following Jesus’ example, we proclaim a love that is ready to “lay down our lives for the brethren” (1John 3:16). By washing my brother’s feet, I say, “I am willing to give up myself to bless you in any way Christ chooses.”

When we have washed each other’s feet and sat down again, the glow in our hearts reminds us of Christ’s promise: “Happy are ye.” And as we keep alive both the practice and the spirit of this ordinance, we know the blessing of closer fellowship with each other and with our Lord Himself.