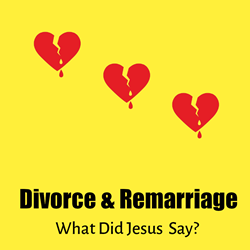 Divorce & Remarriage, What Did Jesus Say?

Let us picture an imaginary scene. You are along with your congregation witnessing in downtown Bluffton, and you encounter a middle aged woman. She has an interest in a better way of life, and is drawn to the simple lifestyle expressed by your group. After an extended discussion related to salvation you finally ask, “Are you married?”

“Well... I’m not sure how to answer that,” she replies. “I have been married several times but my last husband and I divorced three years ago. Right now I live with a man, but we aren’t married.”

Taken aback, you venture, “Is your first husband living?”

“Yes,” she responds, “And I still see him occasionally. He never remarried, but we really never were close.”

Your head is in a whirl. What will you say? Should you address the divorce issue? Again you think of another question that doesn’t totally matter but is related. “Do you have any children?”

“I never had any children until this last relationship. As I got older I decided I wanted a child. Now we have a six-month old son. That is one reason I am thinking I should marry the man I live with so our son could have a right mother and father.” Then after a pause she adds, “You seem to be a people who know the Bible, What should I do? Who is my husband?”

Many from the nominal Christian church would tell this woman that what she needs to do is believe in Jesus, and get married to the man with whom she is living. Their solution is the outgrowth of a “feel-good Christianity.” Ignoring direct Bible teaching related to the sinfulness of living in adultery, they imagine a God who has no standard but the standard of love. They disregard the words of our Lord, “Whosoever putteth away his wife, and marrieth another, committeth adultery: and whosoever marrieth her that is put away from her husband committeth adultery.” (Luke 16:18) They reject what the Holy Ghost has given through the apostle Paul “Know ye not that the unrighteous shall not inherit the kingdom of God? Be not deceived: neither fornicators, nor idolaters, nor adulterers, nor effeminate, nor abusers of themselves with mankind...” (1 Corinthians 6:9)

These people take a few verses out of context, and misapply them to this kind of situation. A verse often used is “Therefore if any man be in Christ, he is a new creature: old things are passed away: behold, all things are become new.” (2 Corinthians 5:17) If this can be applied to a person’s past record of failure, then there is never any need for restitution. Jesus should have told Zacchaeus that all things are new, and he needn’t worry about his past sins. But past sins do need to be faced. The old things that have become new are the attitudes of the heart, and the master whom they will serve. Where once a person has felt they could not live without a marriage partner, now they realize true satisfaction in life comes from Christ. The rich young ruler is near the head of a long, long line of people who have found that following Christ means drastic changes and painful choices. It is not just a matter of accepting God’s forgiveness and everything can stay the same.

Many Mennonites would not tell her to marry the last partner and go on living with him. They have a different solution. Their answer is that this woman should reunite with her first husband. “The one whom thou first hadst,” they would say, “He is thy husband.”

This logic is based on the following line of thought. The first idea is that only the first marriage was a marriage. When this woman and her first husband divorced, God did not recognize that divorce. These two were still married. When she found a second man, and went through the ritual of marriage, it was no marriage. God only recognized a second relationship as adultery. All subsequent marriages are only adultery. There is nothing to any of the divorces or remarriages. Therefore, if a person desires to be in God’s will, he will seek to return to the first marriage.

But what would Jesus say?

By now you likely are recognizing there are parallels between this imaginary scene, and the real one that Jesus faced with the Samaritan woman. Let us examine again the words of Jesus and the woman at the well in their conversation related to her marriage situation. Jesus saith unto her, Go, call thy husband, and come hither. The woman answered and said, I have no husband. Jesus said unto her, Thou hast well said, I have no husband: For thou hast had five husbands; and he whom thou now hast is not thy husband: in that saidst thou truly. (John 4:16-18)

Jesus’ teaching is simple. In essence He said, “You have had five husbands, now you have none.” Jesus did not tell her that her first marriage partner was her husband. He did not investigate who her first partner was who had never been married. He did not inquire who she was married to last. He did not say “This is thy husband.” Rather, after addressing the situation of having had multiple marriages and now living outside marriage, he agreed, “Thou hast well said, I have no husband.” His answer clarifies that the way to holiness in a multiple marriage arrangement is to live without a spouse.

How do people ever get to the point where they think a divorced and remarried person should go back to the first companion? This conclusion is reached after a person has begun to believe a few half-truths and to build conclusions on them.

The first half truth is that “God never recognizes divorce.” Once when an individual endeavored to support this he was simply asked, “In what passage do you find that taught?” After thinking a while he had to admit it isn’t taught anywhere in the Old or New Testaments. It is true that God hates divorce, read Malachi 2:16 for this teaching. But everywhere a person was divorced, the Bible calls it divorce or putting away, and if a new relationship was established it is always called a marriage.

Some maintain that Jesus taught the second marriage is not a marriage but is only adultery. But they are the ones who put the “only” in the thought, Jesus never did. Jesus said when a divorced person marries again he committeth adultery. But he never said, He only commits adultery. Think about what Jesus was saying in the context. Jesus was speaking to persons who believed adultery was wrong because the seventh commandment says so. What they were confused with was “What is adultery?” They had come to believe there were various legitimate ways to put away one’s companion and remarry.

When Jesus dealt with the subject of remarriage after divorce, he pronounced a clear “This is adultery” to these people. Obviously He intended they realize divorcing and remarrying could never be acceptable in God’s eyes, all who did so were turned toward judgement. But Jesus never said it was only adultery and not a marriage. Every place the scripture records a person being joined to another after divorce he is said to be married. Read Mark 6, especially verse 17, and Romans 7:1-3, for some illustrations of this.

Besides, Jesus was also speaking to a people who believed they could never return to their first companion. Read Deuteronomy 24:1-4 and Jeremiah 3:1 for this Old Testament teaching. Going back to the first partner wasn’t even in their thinking.

So we see that God does recognize divorce, it just is never lawful. And God recognizes a remarriage, but it is an unlawful, or an adulterous marriage.

Churches who do not accept Jesus’ teaching on the matter, or are confused on the issue face a perplexing situation. Let us try to follow their line of thinking and see what confusion it begets. We will approach each case as if we believe what they teach. This is very complex so we shall use names that fit in the alphabet with the letter they start with. Lets start down alphabet line with a name like Danny.

Danny is presently remarried to Evelyn. His first wife was named Carrie. Now if Carrie was married before, then according to this teaching, Danny should stay with Evelyn. But if Carrie was not married before, then Danny should break up with Evelyn and seek to be remarried to Carrie. Follow the logic? Simple, right? Only the first marriage is valid according to this thinking.

In conclusion, how would you answer the woman in Bluffton? Are you willing to gently lead her to the only source for fulfillment in life, and tell her what Jesus said, “Thou hast no husband”? This answer is the only answer the Scriptures provide in order to give a person hope of eternal life.