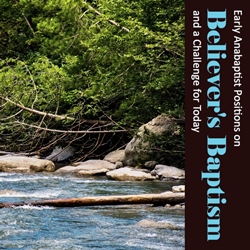 Early Anabaptist Positions on Believer's Baptism and a Challenge for Today

The Anabaptists were named thusly because of their belief in adult baptism. But why did they refuse to validate or practice infant baptism, even at the risk of losing their lives? A brief look at the reasons for their position on believer's baptism and the Scriptural basis for it

Our Christian forefathers were dubbed Anabaptist during the Great Reformation. The name was full of reproach and mockery for those who refused to baptize infants and who requested adult baptism. “Ana” was a Latin term meaning “over again”—or re-baptized. Later the name became a label for groups holding to the doctrines of adult baptism, church membership of adult believers only, nonresistance, and the separation of church and state.

Arguments supporting the requirement of baptizing infants often hinged on the theology of original sin. Papal and/or Reformed theology underlying the state church systems of the Reformation era commonly insisted that the Old Covenant dealt with the issue of original sin through the rite of circumcising infant sons. In “like manner,” they concurred that the New Covenant rite to deal with original sin was the baptism of infants. While the New Covenant does teach that baptism replaces circumcision as the symbol and rite into fellowship with Christ, these beliefs concerning infant baptism were a seriously flawed interpretation of New Covenant scripture and doctrine. Such doctrines presupposed that entrance into the people of God and spiritual communion as the people of God came through outward law rather than by grace through Christ and by voluntary perseverance IN HIM.

A pinnacle word of early Anabaptism was not “faith” but “following” (Jesus). Baptism, the greatest of the Christian symbols, was accordingly a pledge of a complete commitment to obey Christ and to love the brethren fervently. The truest test of Christianity, they held, was discipleship, not an experiential point (baptism). They resolutely clung to First Peter 3:21 as teaching that baptism was outward witness and symbol of inner cleansing, a covenant of a good conscience toward God, bonding them into common trust and Christian experience.

Our Anabaptist forefathers found neither New Testament scripture nor apostolic example to validate infant baptism arguments. More importantly, they found scripture and example to refute them. Their understanding of church history revealed that Pope Innocent in AD 407 confirmed infant baptism as the Papal church practice. This decision of the “church,” they contended, was four centuries after the initiation of the apostolic church. They declared that if such doctrines were true, then all infants from the apostolic time until AD 407 were unsaved. They defended that the words of the New Covenant scripture, not the Papal church system, stood with authority. Furthermore, they argued, “Just as Abraham could not circumcise in his house before the child was born to him … neither can one be baptized in the house of Christ before he is born of Christ.” They concluded according to the Scriptures that baptism must always follow a conscious decision to take up “following Christ.” They believed that a regenerated life becomes the experience of an adult who counts the cost of following Christ, exercises obedience to Christ, and is therefore baptized as a sign of such commitment and life. They also reasoned according to the New Covenant that discipleship is a commitment that sends no “ambassage of peace” but endures unto the end—even unto death. Therefore, recantation was never a true option for one who had counted the cost of following Jesus and had been baptized as a sign of it.

Furthermore, they believed baptism was the entrance rite into a brotherhood—“enrollment in the fellowship of believers” of all who walked IN HIM. To this brotherhood they “belonged.” Though it often meant certain death, they sought to return to these brotherhoods in spite of banishment from their villages, cantons, and families. They vehemently defended the brotherhood and refused to disclose that which brought upon their brethren harassment, discovery, or suffering. Baptism was a sign of surrender, endearment, and accountability. “After man has inwardly and in faith surrendered himself to the new life, he confesses it openly and externally before the Christian church into which he allows himself to be inscribed according to the order and establishment of Christ. In doing so, he indicates … that is to all the sisters and brothers who live in the faith in Christ, that he has been so taught inwardly in the Word of Christ and that he is so minded, that he has already surrendered himself according to the Word, will, and rule of Christ to live henceforth for Him.… In the power of his confession he has submitted himself to the sisters, the brethren, and the church, so that they now have the authority to admonish him if he errs, to discipline, to ban, and to readmit him.… Whence comes this authority if not from the baptismal vow?”

This rite into brotherhood accountability and the corresponding pledge of commitment to follow Christ in all things was called believer’s baptism. It stood in opposition and conflict with the infant baptism beliefs of the day (similarly as child evangelism in modern theology). Menno Simons wrote accordingly, baptism is “not to be taught to those who are unable to hear or understand.” Baptism, they contended, speaks of a regeneration experience with Christ, and should be administered only to “those who desire to walk in the resurrection of Jesus Christ and be buried with Him in death so that they might rise with Him.”

So, while the practice of believer’s water baptism stood as the defining characteristic of Anabaptism to the hecklers of the day, the demands of its call bore the greater significance to those who accepted it.

Finally, early Anabaptists saw baptism as sealed by more than water. They saw water baptism as a baptism into the blood sufferings of Christ, to whose life they conformed. They found this belief in Scriptures such as 1 John 5:7,8. Anabaptist leader Hans Hut records this concept of discipleship and baptism when he writes that believer’s baptism consists of three parts, the Spirit, the water, and the blood—these three witnesses on earth. They thus believed:

This “blood sacrifice baptism belief” was indeed the physical experience to which they often committed their lives when they openly confessed Christ and submitted to believer’s baptism. This concluding and momentous belief should be a constant reminder and challenge to us.

In what way have you been baptized into the sufferings and blood sacrifice of Jesus?