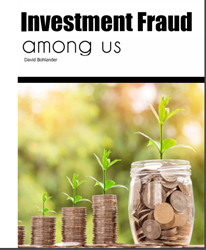 Investment Fraud Among Us

Members of our churches have lost millions of dollars through fraudulent financial activities. These losses have far-reaching effects individually, upon our Christian witness, and upon our capacity to fund the work of God’s kingdom. Learn more about fraud, and how to be part of the solution.

Greed drives the world, so we would tend to think fraud is not found among the Conservative Anabaptists, but this is not the case. Over the years there have been various scams taking millions of dollars from innocent persons. There have been cases where victims were left penniless in their old age.

We are people of a trusting nature and in some cases a bit naive which causes us to be more vulnerable. By being alert and aware that these things can happen, whether by scheme or by mismanagement, we do well to be cautious when investing of our funds or the funds of others. If something is too good to be true, it probably is.

There is another important aspect which involves the testimony we leave with those about us. We teach that to become rich is not the important goal of life and yet our actions say otherwise. May this booklet help to keep our priorities in proper order.

This article is being distributed to help us understand the marks of a developing scam. If this article helps one person, it has been worth the effort to develop and distribute this information.

This article was first printed in the Stewardship Connections newsletter printed by the Anabaptist Financial organization. We appreciate the permission given to us to reprint this article.

Investment Fraud Among Us

“But while men slept, his enemy came and sowed tares among the wheat.” Matt 13:25

We have a very serious problem among conservative Anabaptists. Members of our churches have lost millions of dollars through fraudulent financial activities. These losses have far-reaching effects individually, upon our Christian witness, and upon our capacity to fund the work of God’s kingdom.

I have participated in numerous church-appointed trustee/ oversight committees. In my business consulting work, I also work regularly with many Anabaptist businessmen and accounting, finance, and legal professionals. I have become aware of a troubling amount of fraud committed by conservative Anabaptists. While fraud is often being perpetrated by outsiders on our church members, even more shocking is the fraud being committed by our church members themselves. The impact of this fraud reaches far beyond the financial losses reported in the newspapers.

The purpose of this article is simply to prevent any more harm. Our people must be alerted to the way fraud is financially costly to individuals, harmful to the reputation of conservative Anabaptists, and most importantly, how it tarnishes the broader testimony of Christ and His Church.

Damage to Our Christian Testimony

The fraud I have described is undermining our testimony of honesty and truth, values we would claim distinguish us from the world. Numerous large financial frauds committed by conservative Anabaptists have drawn considerable public and embarrassing attention. Just four of these frauds I am directly aware of caused $125 million of losses to approximately 5,000 members of plain churches in over twenty-five states. I know of seven different federal investigations resulting from these frauds. All of them were committed while the perpetrators were members of our churches. One federal agency has conservative Anabaptists on their investigative radar to uncover more ongoing financial fraud, and has told me that if we don’t clean up this problem, they will.

Fraud is not merely the loss of investors’ money an investment that “didn’t pan out.” Here are some excerpts on the definition of fraud:

Fraud can be defined as a false representation of a fact by false or misleading statements, or by concealment of what should have been disclosed that deceives and is intended to deceive another so that the individual will act upon it to his injury1; It is an act or course of deception, an intentional concealment, omission, or perversion of truth?2 To deceive is to induce someone to believe that a thing is true which is false, and which the person practicing the deceit knows or believes to be false. To defraud is to deprive by deceit: it is by deceit to induce someone to act to his injury,3; concealing a fact from the other party which may have saved that party from being cheated.4.

Key recurring concepts in these definitions are misrepresenting, deceiving, and concealing facts. Fraud is not limited to making a false statement, but also includes deceiving someone by concealing material facts. I am witnessing this deception much more frequently among conservative Anabaptists than I would have anticipated. I hope these are the exceptions, but nonetheless the exceptions are too plentiful. “Know ye not that a little leaven leaveneth the whole lump?” 1 Corinthians 5:6

Examples of Fraud in the Anabaptist Community

To illustrate the depth of the problem, following are examples of some of the fraud, deception, and misrepresentations I have observed.

The most notorious frauds among conservative Anabaptists are those large fraudulent investment schemes that have been described in the media. In a Ponzi scheme, “new” money is used to pay the “return” on earlier money deposited with the promoter. Usually the rate of return the promoter promises is unrealistically higher than can be expected from legitimate investments. Profits from the underlying investment are not generating the return paid back to the investors, but rather new deposits are the source of returns. The scheme collapses if anything interferes with raising new money, which is needed to prop up the illusion that the investments made with the earlier deposited money are generating a true economic return.

An example of a Ponzi scheme was the securities fraud in Holmes County, Ohio, where a conservative Anabaptist church member hid a $10 million investment loss from 2,500 investors for ten years by taking in new money to pay the return on the earlier deposited money. When the Securities and Exchange Commission investigated, a total of $16 million (out of $35 million) of investor funds had been lost, and he was convicted and is serving 6.5 years in a federal penitentiary.

A common characteristic of Ponzi schemes is that the investors do not know and have not verified how and where their money is actually being used. Nor were they presented with information on the financial condition of the underlying investments enabled by their funds.

A fairly common practice among conservative Anabaptists is for investors to deposit their money with a “trusted advisor” who aggregates the deposits and invests them. Investors often overlook or are unaware that these “money pools” are subject to state and federal regulations and must be registered to operate legally. Likely requirements include the following:

In addition to the possibility of administering investments illegally, other dangers of these money pools include the frequent lack of third-party oversight (such as a legitimate board of overseers) and of audited financial statements for the investors. For example, after a presentation I gave on investment fraud, a man in his eighties asked me privately if he should be concerned he had deposited almost $400,000 with a money pool manager and only receives an occasional statement that notes his “accrued” interest. He has no idea where the $400,000 was invested and how the underlying investment, if any, is doing. Nor after three years has he received any cash payments in return of principal or interest. This investment is his primary source of funds for retirement needs.

The “trusted advisor” to whom the investor deposits his money may often have skills such as tax preparation or accounting, but has little, if any, skill in the type of investments he is doing or the type of projects he is investing in (e.g. real estate, businesses, loans made to others). The businessman who filed the previously mentioned Ohio bankruptcy was primarily a tax preparer and had very limited investment experience, but had invested $35 million at his sole discretion. In another instance, a money pool manager with no credible business venture development experience, training, or prior business success, invested and lost over $65 million from 1,500 conservative Anabaptist investors.

If you are currently investing in a money pool, I recommend at a minimum that you insist on the following verification and oversight from the money pool manager:

If he cannot supply this information, immediately make a formal request for the return of all your funds. If these four actions had been taken in the above mentioned Ponzi scheme and money pool fraud, at best the losses may never have occurred, and at worst the harm done would have been considerably less.

Increasing numbers of bankruptcies are being filed by conservative Anabaptist members. These cases lead to conflict and compromise, and sometimes to legal actions that tear the fabric of brotherhood among us. For example, consider the bankruptcy filed in Ohio in 2010 by the individual mentioned above who lost $16 million. The Amish churches of Ohio spent six months and over $200,000 in an unsuccessful petition to reverse the bankruptcy and have it removed from the Federal Bankruptcy Court. They felt strongly that the Church should oversee and restore the damage done by one of their members. More recently, another large bankruptcy has been filed by a conservative Anabaptist member in Indiana. I am aware of a lawsuit filed in Ohio by partners who were defrauded and are trying to remain anonymous in their litigation against Fair Finance— $200 million bankruptcy that significantly affected many conservative Anabaptist investors. Litigation is increasingly being used for debt collection by conservative Anabaptist businesses. The point is that the damage caused by fraud and deception is not limited to the funds that are lost. Fraud brings compromise by leading our members to take worldly legal actions and weakens trust and brotherhood among us.

One of the reasons that fraud is so pervasive among the conservative Anabaptists is the “affinity” factor. Affinity fraud is the type of investment scam in which a con artist targets members of an identifiable group who have something in common such as race, age, or religion. Often he is, or pretends to be, a member of the group. Usually he will promote a Ponzi or pyramid scheme. This type of scam leverages and exploits the inherent trust within the group. Often respected members are used to “spread the word” and they unwittingly aid the spread of the scheme. This helps us understand why conservative Anabaptists so often fall prey to fraud being perpetrated by other members. The inherent trust we afford each other causes us to overlook the lack of proper oversight and accountability.

It is my strong opinion that much greater accountability must be exercised by all members of the Anabaptist community, and particularly by church leadership, or more harm will be done. Confronting questionable behavior is difficult, but must be done. Our community holds to and expects self-governing of our community and the issues that arise within the community, but is often slow to confront those who refuse to be voluntarily accountable. There were suspicions about most of the large financial frauds we have mentioned years before these investment schemes reached a crisis, but they were not investigated. This lack of effective intervention emboldened the investment schemers and allowed them to continue to harm innocent people. Indecision is a decision. Indecision caused substantially more harm to be done than if these perpetrators had been confronted sooner.

Be part of the solution

We must begin to deal proactively with these problems of fraud within the conservative Anabaptists. I envision a collaborative effort of broad-based conservative Anabaptist leadership working to prevent future fraud as well as bringing current investment practices into legal compliance. We already hold the foundational values of accountability and responsibility to each other that are necessary to bring about reform.

“Ye are the salt of the earth: but if the salt have lost his savour, wherewith shall it be salted? It is thenceforth good for nothing, but to be cast out, and to be trodden under foot of men.” Matthew 5:13