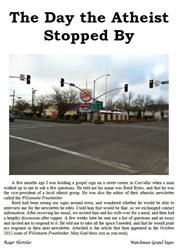 The Day the Atheist Stopped By

This article is a dialogue between Roger Hertzler and an atheist he met on the street. Roger makes some very thought provoking statements that point to the God that he believes in.

A few months ago I was holding a gospel sign on a street corner in Corvallis when a man walked up to me to ask a few questions. He told me his name was Reed Byers, and that he was the vice-president of a local atheist group. He was also the editor of their atheistic newsletter called the Willamette Freethinker.

Reed had been seeing our signs around town, and wondered whether he would be able to interview me for the newsletter he edits. I told him that would be fine, so we exchanged contact information. After receiving his email, we invited him and his wife over for a meal, and then had a lengthy discussion after supper. A few weeks later he sent me a list of questions and an essay and invited me to respond to it. He told me to take all the space I needed, and that he would print my response in their next newsletter. Attached is the article that then appeared in the October 2012 issue of Willamette Freethinker. May God bless you as you read.