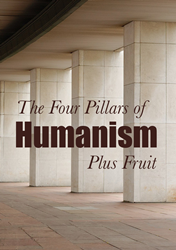 Four Pillars of Humanism Plus Fruit

Humanism is Satanic driven—essentially glorifying man in defiance of God. Humanism is an “easy” flip of Truth, in our easy-to-live, fun-filled, pleasure-mad, financially-driven, entitlement-minded, counter-culture society. Humanism reverses the truth of "Thou art worthy, O Lord, to receive glory and honour and power: for thou hast created all things, and for thy pleasure they are and were created to the emphasis and practice that all things are for the pleasure of man."

In whom the god of this world hath blinded the minds of them which believe not, lest the light of the glorious gospel of Christ, who is the image of God, should shine unto them. (2Co 4:4). For the wrath of God is revealed from heaven against all ungodliness and unrighteousness of men, who hold the truth in unrighteousness; Because that which may be known of God is manifest in them; for God hath shewed it unto them. For the invisible things of him from the creation of the world are clearly seen, being understood by the things that are made, even his eternal power and Godhead; so that they are without excuse: Because that, when they knew God, they glorified him not as God, neither were thankful; but became vain in their imaginations, and their foolish heart was darkened. Professing themselves to be wise, they became fools, And changed the glory of the uncorruptible God into an image made like to corruptible man, and to birds, and four-footed beasts, and creeping things. Wherefore God also gave them up to uncleanness through the lusts of their own hearts, to dishonour their own bodies between themselves: Who changed the truth of God into a lie, and worshipped and served the creature more than the Creator, who is blessed for ever. Amen. (Rom 1:19-24).

Humanism is old—its birthday is the casting of Satan onto the earth (Luke 10:18). Over one-hundred-fifty years of globalization, civilization, and scientific innovations are now bearing its fruit. First-world cultures have now all but capitulated to its brazen effects.

Humanism is insidious—its ripple-down effect is subtle but definite. Its influence is mostly well established long before it is apparent in actions.

Humanism is pandemic—what was insidious in a generation past is now in proliferous fruit-bearing. Little remains to restrain its corruptive influences and practices. Abominable sins abound, and sodomy is rampant. Psychology rules. Politics overshadow. Deception is booming. Sin is uncontrolled.

The pillar of Atheism stands upfront. Atheism declares there is no God, no Sovereign Deity, no Divine Being—the zenith of Psalm 14:1; 53:1; The fool has said in his heart there is no God. Atheism, once far away from our regular environment, is now commonplace. Yes, political terminology masks this “ism.” Common acceptance makes it appear harmless. Its insidious diabolic nature is clouded, muted, or muffled, but its attack on God remains. Atheism is still Atheism. It defies and denies the existence of a Sovereign Deity.

The second pillar is Evolution. Influence from or adherence to the first pillar makes it a tiny step to the next. Evolution naturally and logically follows Atheism. If there is no Divine Being, there is no Divine Creator. If there is no Divine Creator, man’s existence was formed from some lower form of life. Evolution openly attacks God. It saturates almost every aspect of secular history portrayal, secular museum galleries, secular recreational attractions, secular theatrical projections/shows, and secular musical expressions, both online and offline. Not only is evolution openly defiant, but it is also blatantly taught and received by a vast swath of civilized cultures. Its tentacle reaches into Intelligent design doctrines, old-earth theories and even seeks to embed itself into absolute 7-day Creation principles and doctrines. Our generation is targeted with evolutionary concepts in nearly every conceivable venue of education and information knowledge.

The pillar of Abstract Moral Reality stands in the shadows of the former. If indeed man has evolved, then he has no direct connection to a divine being. Therefore, no logical connection exists between absolute truth and “perceived truth.” In fact, there remains no solid reason to even believe absolute truth exists. One brave Christian confronted a loud-mouthed advocate of the idea that “there is no absolute truth” and silenced him by asking him a question. “If there is no absolute truth, then is what you just told me true?” This challenge to relative truth theory fully exposes the outrageous fallacy and godless behavior stemming from Atheism and evolutionism. If there is no God, no Creator, then, of course, there is no measurement of righteousness, no absolute truth, and consequently, no reason for conformity to righteousness, neither is there judgment of sin.

The fourth pillar is Logical Amorality. Which simply means none or without. And the LORD said, Behold, the people is one, and they have all one language; and this they begin to do: and now nothing will be restrained from them, which they have imagined to do (Gen 11:6). If there is no God, there is no standard. If man evolved, he is still evolving and furthermore can become superhuman—science indeed is intent on such technology. If truth is relative, there is no moral reality—the foundations are shattered—everything is quicksand. By this logic, all that remains then of morality is likes and dislikes. Likes and dislikes become subjective too and relegated to mere perspective, personal individuality, and personal preferences. Self-expressions of logical amorality are noticed in the “not so far removed” social media emoji concepts of “thumbs up” and “thumbs down” likes and dislikes. Are these emoji logical amorality of themselves? Perhaps not. However, they do illustrate and indicate winds of influence. Other’s expression of “If it feels good to me, do it.” “If I like it, who can say no?” “It’s my business not yours.” “If it makes no logical sense, then it is not truth.” “What is wrong with it?” “I can’t tell you what is wrong; you can’t tell me either.” “It’s nobody else’s business,” etc. Individual perspective and preferences, we might say. Logical amorality is exalted in freewheeling “spiritual” lifestyles, inconsiderate of others since each is open to pleasing himself without consequences. Are we free from this influence pouring out from the supporting pillars of humanism? Are we picking its fruit?

This know also, that in the last days perilous times shall come. For men shall be lovers of their own selves (2Ti 3:1,2).

Then comes the Dehumanization of mankind. Sweeping, “acceptable,” “expected,” and “forthcoming mandates” governing interpersonal behavior patterns are the reality of everyday life. “Degendering” the human family is well underway. Neutralizing, fiendish, sexual behavior is now exalted in political/public spheres of influence. It appears that gender-specific language use may soon be labeled and punished publicly as hate speech? Punitive economic measures are already established. Biblical principles and practice are openly under serious attack from free-thinking, non-principled culture ideologies. These behavior pattern errors planted more than a generation past have now broken out into fruit-bearing. The reality of it is unbelievable, except by a strong confidence that God has prophesied it would be so. For that righteous man dwelling among them, in seeing and hearing, vexed his righteous soul from day to day with their unlawful deeds (2Pe 2:8). These evils began their exponential growth, first by the social media revolution, next by scientific reform movement, and now through liberal political governance. The dehumanizing of mankind is in precipitous freefall. Facial identification is no longer considered as an essential of God-created human uniqueness. Science, data modeling for life’s answers, and human reasoning trump Truth. Entitlement to life trumps God’s decree that “to dust thou shalt return.” The devaluing of face-to-face, hearing-to-hearing direct contact in interpersonal relationships is replaced with distancing, online relationships, etc. Social distance and its associated relationship tools are touted as human advancement when, in fact, they are nothing short of the fruit of humanism. All these are swiftly altering how people are viewing God’s unchanging principles in human behavior patterns. The sum of all these things is propelling the globe into chaos like an unraveling giant ball of yarn—from the core out. It is humanism from the core.

May the God of Abraham, Isaac, and Jacob be our God in these evil days. Let us take note of the encroaching, powerful darkness, which vies to deceive and overtake our souls. Let us place our full trust in an unchanging God. Let us amend our lives to fit God’s unchanging Truth. Let us, as Daniel of old, bow down to only the God of Creation and His absolutes. Let us, by conscious decision, identify humanism and reject those things which move our hearts away from God. Let us each have a personal faith that limits and moves our hearts in practices that glorify God.