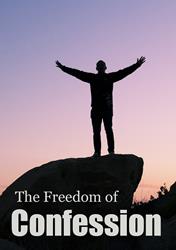 The Freedom of Confession

Who offers a better freedom- Christian rebirth or the American revolution? Who offers more freedom from tyranny- America or Jesus Christ? Who has broken more chains for men in this land- Independence or Dependence on Jesus Christ? How do we obtain true freedom?

It’s that time of the year again when all good Americans unite in setting aside a holiday of remembrance. Independence Day is the official anniversary of the signing and distribution of the Declaration of Independence on July 4, 1776.

The forefathers of this land paid a high price to design, sign, and defend this statement of freedom from tyranny. While paying this price, these men and their supporters developed two strong attitudes about their freedom- 1. The price and process must never be forgotten. Therefore, a day of remembrance was set aside for all to stop, consider, and commit to the same. 2. All who do not support this cause and commemoration are traitors. In the early years of the formation of the United States, our forefathers were persecuted because they would not support this cause.

Independence Day is not much of a holiday for those who belong to the kingdom of heaven. We are under kings, tyrants, or leaders all the same no matter who won the revolution. Our forefathers kept their distance from the revolution because they were “not of this world.” As we follow in their footsteps, we ought to “keep the same rule.”

But Christian living is not a life devoid of freedom. As a matter of fact, it is worth considering who offers a better freedom- Christian rebirth or the American revolution? Who offers more freedom from tyranny- America or Jesus Christ? Who has broken more chains for men in this land- Independence or Dependence on Jesus Christ?

One of the astounding things in American history is the realization of how much war followed the war of 1776. In almost every generation, Americans have lost some of their rising generation to the grim reaper of war… sometimes against other nations, and even at times, with herself. With this in mind, we may wonder: how free is this freedom?

Since the holiday is not really our holiday, this may be an excellent time to observe some of our freedoms. Salvation through Jesus Christ offers glorious freedom: freedom from guilt, freedom from fear of death, freedom from Satan’s chains, freedom from selfishness, and freedom from restlessness.

There is a freedom available to the followers of Jesus which is often forgotten in long-term living in the Gospel. This freedom which ought not to be forgotten is the freedom of confession.

Confession is not the most pleasant subject; it carries with it some attachments that are not naturally easy to think and do.

Confession is the humiliation of the soul which occurs when the mouth opens and accurately portrays what’s inside. In this way, confession can be something positive- “Jesus is the only name under heaven which can save men, and this I believe.” Or it can be something negative- “Father, against thee have I sinned.”

While the practicing of confession is a very simple deed, we commonly find the attitude of confession to be hard. Who wants to say out loud where they have been wrong, where they have sinned, or who they have wronged? The human nature with all its bent toward carnality shivers at being so transparent. People have broken out in sweats, experienced rapid heartbeat and lost sleep when they have realized that they are wrong and it’s time to “‘fess up.” Because of these difficulties, many, many people have searched for freedom some other way, rather than coming through the door of confession into the sheepfold.

In the war of confession, people will “act dumb,” feign innocence, or fling themselves into other good works to drown the thumping conviction that “I must confess.”

Confession, according to one dictionary, is mea culpa, (Latin for “through my fault”). Ever hear someone say, “My bad” …. Or “This one’s on me?” These are modified confessions. It is the individual taking personal responsibility for a specific failure. In our spiritual lives, we all have times when this assumption of fault or wrong is our only responsible choice.

In Proverbs 28:13, the Scriptures teach us the polar opposite of confession- covering sin. When all the pretenses and hypocrisy of our carnal behavior are stripped away, we have only two options: cover or confess.

He that confesses (and forsaketh) his sin shall have mercy. Oh, the freedom of mercy! Freedom from gnawing guilt; freedom from the shifty wondering of “who knows and what do they think?” Interesting enough, this freedom only becomes available in BOTH confessing and forsaking. Neither alone will set the sinner free. Doing better (forsaking) alone does not bring freedom.

First John 1:9 teaches us that confession (this one’s on me) before Christ is the solution for our sins. Few people mature enough to read and write need teaching on the problem of sin. Guilt has its own built-in megaphone. Guilty before Christ is an easy deduction to make. But through confession (through my fault), we are set free from sin before Christ. Oh, the freedom of forgiveness!

James 5:16 teaches that confession (this is who I am) before the brotherhood is the pathway for both physical and spiritual healing. Very few of us fully understand the battles of the mind pertaining to fear of man. There can be a strong tie between a person’s fear of man and his unwillingness to “own” his faults. To confess faults before the church at council meeting, revival meeting or anytime when it is needed is liberating and healing. Oh, the freedom of healing!

Independence Day will come and go with a bang for America. Some will remember, give thanks, and commit to the preservation of the freedoms they discover. Others will be so wrapped up in feelings of social inferiority or self-pity that the day will be miserable for them. For us, let us not only rejoice in the option of freedom in confession. Let us practice and delight in the liberation of confession.

More on this subject: