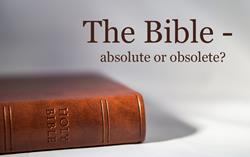 The Bible - Absolute or Obsolete?

Absolute? or obsolete? These questions demand honest answers. Your answers to them will shape the way you live life here and now, and affect your destiny in the world to come.

The word “absolute” means “free from all imperfection, fixed and unchangeable qualities, concepts or standards, and unquestionable finality.” The word “obsolete” means “out of date” or “fallen into disuse.”

The Bible has always been and will always be all of what is embodied in the above definitions of absolute. “Free from imperfections” is what is meant when we speak of the inerrancy of the Holy Scriptures. “Fixed and unchangeable qualities” is what the Psalmist meant when he declared, “Forever, O Lord, Thy word is settled in heaven” (Psa 119:89). “Unquestionable finality” is what Jesus was emphasizing when He declared, “Heaven and earth shall pass away, but my words shall not pass away” (Matt 24:35).

Article I of our 18 Articles of Faith rather concisely states that the Word of God is “authentic in its matter, authoritative in its counsels, inerrant in its original writings, and the only infallible rule of faith and practice.”

In Isaiah 45:19, God testified of Himself, “I declare things that are right.” That is the only kind of declarations God makes. God cannot lie. He cannot contradict Himself. He will never be embarrassed or need to apologize for misstating the facts or for not knowing what He was talking about.

God’s Word is the only absolute historical record of the origin of man and of the universe. In an effort to learn something about these origins, modern scientific agencies have spent billions of dollars on modern space ships and powerful telescopes. They now claim to be able to discover objects 18 billion light years from the earth. Light travels about 6 trillion miles a year. Six trillion times 18 billion is equivalent to 184,000 trips to the sun and back again every second for 100 years.

One of the reasons for these expenditures and explorations is an effort to find the end of things so they can learn something about the beginning of things. For only a few dollars they could purchase the absolute message of God and have their answer from the one Book that will never become obsolete. “Professing themselves to be wise they became fools” (Rom 1:22).

The Bible is the only absolute revelation of the destiny of this world and of the wicked, as well as the eternal glory of the righteous.

Instead of trembling at the absolute Word of God, men everywhere are trifling with its absolutes and are trying to render obsolete its absolute message.

One church leader argues that it is right to receive divorced and remarried couples into the church because the counsel of the church is favorable to it, thus making obsolete the absolute teaching of Jesus and the apostles on this subject (Luke 16:18, Rom 7:1-3).

Still another church leader argues in favor of “homosexuality of unknown origin for which no one can be blamed,” making obsolete the absolute message of both the Old and New Testaments on these moral perversions (Lev 20:13, I Cor 6:9-11). Almost every Bible absolute on moral purity is today being rendered obsolete. Men who are doing so should rather be warning of the absolute impending judgment of God on an immoral society.

One could go on with illustrations of absolutes of God that men are rendering obsolete. We cry out in desperation with the Psalmist, “It is time for Thee, Lord, to work: for they have made void (obsolete) thy law” (Psa 119:126).

Menno Simons along with many others rose in the 16th century reformation in defense of the absolute Word of God. This was a time when the professed church had rendered obsolete almost every standard of right. The Church of Rome, then as well as now, declared themselves to be the absolute voice for the people rather than the Holy Scriptures being that voice. Menno went to the Bible for his absolutes and would challenge his opponents by saying, “Show it to us in the Scriptures.” The artist’s concept of Menno with his finger on his Bible, symbolizes a heritage of absoluteness that we want to defend and enrich today. May we ever keep our finger on the absolute, infallible and eternal Word of the Lord.

“Its doctrines are holy, its precepts are binding, its histories are true and its decisions are immutable. It is given to us in life, will be opened in the judgment, and remembered forever. It involves the highest responsibility, will reward the highest labor and will condemn all who trifle with its sacred contents.”