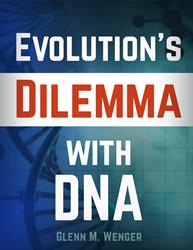 What modern scientific research is teaching us about the origin of life.

Within every cell of every living creature from the tiniest bacteria to man, is a “blueprint” that carries a detailed series of instruction as to the operation of that cell and the entire body. These instructions are written in deoxyribonucleic acid (DNA) molecules (except in the case of a few viruses in which it is written in RNA). The DNA molecule’s structure is a double helix (envision a twisted rope ladder), made up of “pairs” (think of the rungs of the ladder bonded to each side), of adenine bonded to thymine or cytosine bonded to guanine. Each of these pairs is called a nucleotide.

The genome for H. Influenza bacterium is 1.8 million nucleotides long. That of the fruit fly is 120 million, and the human genome is 3.5 billion pairs long.

The idea of “mapping” the human genome was first discussed in 1985, and it was soon felt that it could revolutionize cancer research. By 1990 the international “Human Genome Project” was underway, hoping for completion by 2005 at an estimated cost of $3 billion. Two groups were working on the project, exchanging information. One group used 100 Pentium III computers to process the massive amounts of information, the other group used 40 four-processor Alpha SMP super computers with four gigabytes of RAM each.

They have now completed a “first draft” of the entire genome. (They published their results in February 2001.) However, it is by no means finished, complete and error free.

How does that compare with the information contained in DNA? DNA the size of a pinhead would hold enough information to fill 500 stacks of books as high as the distance from the earth to the moon! It has been said that the DNA in the nucleus of every cell contains “a digitally coded database larger, in information content, than all 30 volumes of the Encyclopedia Britannica put together.” All life starts out as one cell which contains the complete instructions for becoming the creature it will become in a microscopic bit of DNA.

What scientists have been discovering is how the DNA molecule is made—of what elements in what order. But this is only the beginning. As mentioned above, DNA contains a digitally coded database of information. True, these billions of elements must be assembled in the precise order, but this order must also contain information. And not only that, it must be able to convey or express all of that information in a sort of language of instructions that can be carried out. It doesn’t matter how much information we have access to, if it is written in a language we cannot understand, it is of no value.

This digitally coded information is decoded by many different kinds of enzymes, which need to be independently encoded to translate that information. Each cell in the body, as it divides, duplicates the information encoded in the DNA, and the new cell then carries on its work perfectly and produces more cells with the same DNA information which will continue to be followed unerringly.

The Limits of Matter

DNA contains this vast database of information, but does DNA understand it? Does the DNA molecule know what information it is relaying? Does it know what it is doing at all? No, DNA is only a physical substance, like the semiconductor in a computer chip. It has no intelligence. It is only the material upon which the coded information is written. We can write our thoughts on paper, and the paper is none the wiser for containing those thoughts. DNA is like that paper. It is only the material upon which the information is recorded. Nor do the enzymes that decode the information know anything about what they are doing. Information is expressed in a language on a physical medium. Neither the language that it is expressed in, nor the medium upon which it is written have any understanding of the thoughts or information they are expressing, nor did they originate it.

Ideas, information, thoughts and language can not originate from material sources. If it were possible for the DNA molecule to just “happen”, the encoded information that it contains still would have to be designed by an intelligent Source. The fact that information is expressed in a language that can be read and acted upon by the rest of the cell makes it absolutely impossible to have developed without design by an intelligent Being.

In humans, it is recognized that the brain functions as a computer that acts on thoughts presented to it by another source - the mind. It is not our physical brain that originates our thoughts. It is what we call our minds. It is evident that man is not merely a physical creature; he is also a spiritual creature.

The Challenge of Responsibility to God

The Bible tells us that God, who is a spirit, created man in His own image. He also gave us the capability of making a decision as to whether we would accept our Creator and surrender to Him, or whether we would rebel against Him.

Mankind at large has rebelled against God. His conscience (mind), convicts him of the reality of a creator to whom he is responsible. Because this is an unpleasant conviction, he feels he has two choices: (1) Surrender his will to that of the Creator and live as He dictates; or (2) Try to find a way to “prove” that he could have come into being without the intervention of a Creator. Unfortunately, carnal man is determined to stay with option #2 at all cost.

It does not take much study of Evolution on the part of an open-minded individual to see that the theory of Evolution is not founded upon observed phenomena or scientific facts, but rather it is founded on the determination to promote atheism, or more specifically to escape the reality of a God to whom man is morally responsible. In the case of Evolution, the scientific process is completely ignored.

There have been and still are several opposing views as to how evolution could occur. It is well known that the earlier theories of the environment causing genetic modification is in error, yet those who promoted it are exalted as great teachers of truth. We notice too, that the proponents of every school of thought about evolution can disprove every other theory of evolution, but none can prove their own. Yet they are united in the belief that evolution is what must be taught. In other words, it is not truth that is important, all that matters is that people “believe in” evolution. All that matters is that they do not believe in God.

Since it takes protein to construct DNA, and it takes DNA to make protein, we have an impossibility for evolution. The first could not come into being without the second already existing.

Scientific findings, like DNA prove conclusively that life came into being by distinct design. Without DNA there is no life. Could the passing of millions of years arrange chemicals in a certain way to express complex information in a language that is then decoded by enzymes to accomplish the constructing and operating of a single cell? I think everyone knows the answer.

The theory of evolution was developed at a time when scientists knew very little about life. With all the scientific knowledge available now disproving evolution, such a theory could not take root today. However, the scientific world has always been slow to give up their theories in the face of the facts, so instead attempts are made to shore up the crumbling theories of evolution, with new and ever more incredible ideas, or we simply get a shrug and a “I don’t know how, but somehow we evolved.”

Even if the complicated DNA molecule (which is taking scientists many years with high speed computers to even map out) could have happened to come together in millions of years, and even if this DNA molecule were properly encoded, life would still be impossible, because at the same time the correct enzymes that can decode the information would need to be there. They would have to develop at the same time, because one could not exist without the other, and they would need to be complete instantly, because “partially evolved” they could not exist and would be of no value. The theory of evolution stops short at the DNA molecule. If it would be possible for all these things to happen by some strange chance, and a complete cell happened to form, we would have one (1) dead cell. There is yet a thing called life that we need.

Much of the information about the DNA mapping project in this article comes from “Software Development” June 2001 Cover feature “Some Assembly Required” by Roger Smith and Alexandria Weber Morals. Some of the other facts were taken from “The Berean Call” Jan. 2001