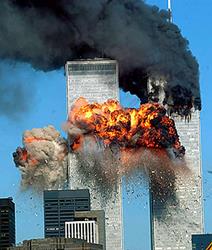 September 11, 2001 is a date most Americans remember. The sense of security people felt vanished as news of the terrorist attacks spread. As time goes on, some of the memories fade, but there are still many lessons we can learn from that day.

September 11, 2001 will forever be imprinted upon the minds of the American people. When we heard about the planes that slammed into the World Trade Center Towers in Manhattan, and later saw pictures of the buildings in smoke and flames, we were stricken with horror.

And then the news commentator announced that the Pentagon building near Washington, D.C. was hit. A huge plume of smoke rose from that five-sided, five-story building. A short time later we were informed that a passenger jet had crashed into the ground southeast of Pittsburgh in rural Pennsylvania. That plane narrowly missed hitting a school where nearly 500 children were in attendance. If it had hit the school, there likely would have been a massive loss of life.

The death toll from these terrorist actions stands at approximately four thousand. Thousands of lives have been affected as families face futures without loved ones. Hundreds of people are slowly recovering from the physical and psychological wounds inflicted by this mind-numbing tragedy.

The United States government has been executing a response to this attack. Many are holding their breath waiting to see what will happen next. As we consider this tragedy, we want to think about some lessons we can learn from it.

Paul writes in 2 Timothy 3:1-5, “This know also, that in the last days perilous times shall come. For men shall be lovers of their own selves, covetous, boasters, proud, blasphemers, disobedient to parents, unthankful, unholy, without natural affection, trucebreakers, false accusers, incontinent, fierce, despisers of those that are good, traitors, heady, highminded, lovers of pleasures more than lovers of God; having a form of godliness, but denying the power thereof: from such turn away.”

Certainly these verses are an apt description of the groups of men, who without a shred of regret, took several hundred lives on four airplanes. Also, several hundred fire fighters and dozens of police officers, along with nearly four thousand persons in the destroyed buildings, were cruelly put to death by these people.

The world of the terrorist today is frightening and twisted. Terrorists, in the name of God, believe it is okay to hate, murder, maim, and destroy innocent human lives. They believe that there is a special place in heaven reserved for those who kill themselves and others.

We live in a world of drive-by shootings, violent rapes, rampant destruction of human fetuses, and senseless sexual exploitation of children and young people. There is a general disregard for God and His moral absolutes. Our world today is a world of sex-soaked immorality. Images and language which would have been banned twenty years ago are now commonplace in many living rooms. Nudity and bad language assault our nation on the television tube. Many youth have no respect for authority. Our perilous world today is closer to destruction than we may think.

Death is certain. Hebrews 9:27 says that “It is appointed unto men once to die, but after this the judgment.” There is probably nothing more certain than the fact that unless Jesus Christ returns first, every person in the world today will die and stand before a holy God in judgment. The people who died on September 11 had no idea when they started their day, that this would be the day of their death. They were sipping coffee, riding elevators, boarding airplanes, and doing countless other ordinary things. In a moment, many without warning were in eternity. Many of them were ready to face God, but what a tragedy that many more were not prepared to die.

What a lesson this is for each of us. Jesus Christ came to this earth two thousand years ago and died on the cross to pay for our eternal salvation. That salvation is free and it is available to all, but it is not cheap. It cost the blood of God’s only Son. It is not effective in our lives until we reach out by faith and accept it. We do that by acknowledging our sin to God, repenting of that sin, acknowledging that Christ is God’s Son and that He died to pay for our sin. We then must accept that payment and allow Christ to live within us. Then we must live lives of obedience to Him.

If you do not have the assurance of salvation; if you are not sure that if you died tonight you would go to Heaven — as Christ’s ambassador, I urge you to make it a top priority to come to Christ for salvation. Even in the midst of a perilous world today, the “good news” is that we can be ready to face death at any moment through the blood of our Savior Jesus Christ.

This fact was driven home to the nation as we saw images of people describing loved ones who were killed. It was heard in the frantic cell phone calls made by doomed passengers to loved ones. The words, “I love you, I love you” were penetrating and heartbreaking.

We saw the importance of family and friends as we heard about and saw pictures of funerals and memorial services for the loved ones. It was felt as we heard about people frantically rushing from building to building, then to morgues and hospitals in a desperate search for missing family members.

A number of people who had started divorce proceedings canceled them and decided to try to restore their marriages. Some news commentators said they were forced to think about what was really important to them, and they realized one of the important things was family and friends.

All of us need to remember and cherish our family and friends. We should encourage and build each other up. Our family members should feel safe and loved in our homes. How desperate we would be to provide that love and care if they would be taken away from us by death. So let’s resolve to treat our family and friends in a way that will help to build legacies of good memories after we (or they) are gone.

Prayers as simple as “O God, help me,” along with a variety of prayers uttered at the nation’s capital and in churches all over the nation, ascended to God. We were reminded of the importance of prayer for our President and our civic leaders; for the nation and protection for its people; for the rescuers who made such selfless sacrifice in laboring nonstop to find victims of the disaster; for the wounded and injured; and yes, even for the enemies who did this terrible deed.

We need to remember that we are to be people of prayer at all times, not just in times of disaster. Our relationship with the heavenly Father should be one where we are familiar with prayer and the worship of God. Then when disaster strikes we don’t need to get acquainted with God; we already know Him and can come boldly into His presence and find grace to help in our time of need.

Thank God for the comfort and value of prayer. Let’s resolve to be a praying people.

Speaking of the terrorists, Pennsylvania’s Governor Ridge said, “They did not drive us apart; they will bring us together.” The days and weeks immediately following the attack brought an incredible coming together of the nation. Flags flew. Signs read, “God bless America.” People were united around the President. There were of course, a number of groups opposed to the President’s action, but the sense of unity was great.

The time of national tragedy brought a rare cooperation between the political parties. Differences were forgotten or minimized as they pulled together to deal with the agenda of rescue, rebuilding, and response.

All around us, there continue to be people whose hearts have been softened by this tragedy. I heard of a Christian organization close to the World Trade Center which said, “We are determined to use this disaster as a tool to share the love of Christ with others. People are open to Christ during the time of tragedy.”

We need to be open to God’s direction and be ready to share the gospel when He gives the opportunity. It’s great to pray for and support missionaries, but that does not relieve us of the individual responsibility of obeying Christ’s imperative command to “Make disciples of all nations.”

A survivor of the disaster says, “From now on I will take every opportunity I have to share the gospel. We don’t know how many opportunities we will have.” What a challenge for every one of us! How are we going to use the opportunities God gives us to witness to a lost and dying world?

We serve a God who is sovereign in the affairs of men and nations. The stories of people who were doomed or spared that day are a silent testimony of God’s sovereign hand in our affairs.

For example, one lady missed an elevator. She was walking through the lobby and saw the doors of one elevator about to close. She yelled to the people in the elevator, “I’ll take the next one.” Within moments she heard a loud whoosh, like a strong wind. She started running. Before she got through the revolving door, all the glass broke, cutting her wrist and slashing her head. But because she missed the elevator, she made it out alive.

We cannot understand God’s ways, but we can take comfort through our tears that truly “All things work together for good to them that love God” (Romans 8:28). Our sovereign God loves each person more than any of us can possibly love our children. His timing is always accurate, and He will never do or allow anything to happen to us that is not for our good and for His glory. Charles Spurgeon wrote the words, “God is too good to be unkind. He is too wise to be confused. If I cannot trace His hand, I can always trust His heart.”

As our nation reeled from the terrorist attacks, many people across the land called for a turning back to God. President Bush called for a National Day of Prayer and Remembrance.

Tragedy makes us think. The Scripture says that we are to humble ourselves and pray, and seek God’s face, and turn from our wicked ways, if we expect God to hear from heaven and forgive our sins and heal our land (see 2 Chronicles 7:14). These words are a ringing call to each of us as we reflect upon the tragedy we have lived through. In these perilous days, we need humility and prayer, and a seeking of God’s face, and a turning from our sins. God’s precious promise is that if we do these things, He will hear, forgive, and heal our land.

God can keep us even in perilous times. But if He chooses to take us through the fire of tragedy, He will never leave us or forsake us. We should always be ready to stand before God, for we do not know when we will be called upon to exchange time for eternity.