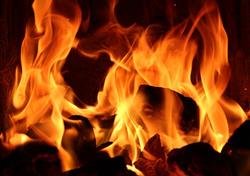 A Journey Through the Halls of Hell

People sometimes doubt the existence of Hell or wonder how a loving God could send people there.The Bible teaches us there is a Hell and it is literal and eternal punishment. It is prepared for Satan and his angels, not man, but those who follow him will go there also.

There are many journeys I would like to take. I would like to go to the beautiful Hawaiian islands, or up the snowy Alcan Highway to Alaska, or across the Atlantic for a tour of the Holy Land. But there is one journey I never want to take—and that’s a journey through the halls of Hell.

You say, “But even an earthly father (no matter how rude) would not think of sending his children to a place like Hell. Do you mean to charge our loving God with tormenting his children forever in a Hell of fire and brimstone?” And the answer is, “No—God does not send His children to Hell.” Unsaved sinners are not the children of God, but children of the devil (See John 8:44). God’s children never go to Hell, but the children of the devil all go there. And God will never send anyone to Hell. One who goes there, will go because of his own deliberate choice. God wills that all men be saved, and thus Hell was prepared not for man, but for the devil and his angels (see Matthew 25:41).

The Bible teaches that there is a Hell, that Hell is a literal place of torment, and that Hell is eternal punishment.

Jesus gave an account of the death of two men, as recorded in Luke 16. The one died, and was carried by the angels into the presence of God. The other opened his eyes in Hell. The rich man (who refused to repent, Luke 16:30) was once a man who lived and walked on earth exactly as we are doing now. But today he is alive and awake and conscious in Hell.

The Bible says, “The wicked shall be turned into hell” (Psalm 9:17). You may not believe that now, but you’ll not be in Hell five minutes until you will be convinced that there is a real place of punishment. The kindest Man who ever lived, said, “But rather fear him who is able to destroy both soul and body in hell” (Matthew 10:28). It’s true that some people with softest smiles will tell us that saint and sinner all alike, will turn up in Heaven at last. They say that both Nero and Paul, Jesus and Herod, Elijah and Jezebel—that each will come out on the same side of the judgment throne. But if it is reasonable to hold out the hope of Heaven as a reward for serving God, it is just as reasonable to hold out the fear of Hell as a penalty for rejecting God’s plan of salvation.

The words uttered by the unsaved in their dying moments, also testify to the existence of a burning Hell. It is not pleasant to see the ungodly die. Charteres on his deathbed said, “I would gladly give one hundred fifty thousand dollars to have it proved there is no hell.” The infidel Adams, cried, “I’m lost, I’m lost! damned! damned! damned forever!” When Voltaire lay dying, his condition became so frightful that the nurse who stood by, later said, “For all the wealth of Europe I would never want to see another infidel die.”

Road repairs were being made on one of the main highways of Pennsylvania. At the place where the construction began, there were two signs. The first said, “Travel at your own risk.” The other said, “Road closed beyond the cemetery.” That last sign expresses the viewpoint of many today—nothing beyond death. But the Bible teaches that there are tworoads—the one leads to life everlasting, and the other to eternal damnation.

Hell is more than the torment of a guilty conscience. Hell is not the grave. The rich man (in Luke 16) said, “I am tormented in this flame.” He wanted his brothers to repent “lest they also come to this place of torment.” Repenting would not have kept his brothers from the grave, because all people die—but repenting would have kept them from Hell.

Hell is not just some spiritual state. The rich man in Hell knew he was not merely in some hazy, cloudy mixture of nothing, for he wanted his brothers warned lest they come to this PLACE. Hell is a real place, and its inhabitants suffer real torment. Consider the agony and imagine the anguish of that poor lost soul to whom a drop of water would have been a taste of heaven.

It took the torments of Hell to turn the rich man’s thoughts toward God. Are you going to be like him? Are you going to wait until you are burning in Hell before you get concerned? The tragic fact is that then the harvest will be past, the summer ended, and it will be too late.

If we could get a vision of the sinner’s agony and pain during his first five minutes in Hell, and then add to that miserable condition the word “everlasting,” we might have some concept of what it would mean to go to Hell.

The Bible says much about the duration of Hell. Daniel 12:2 says that some shall awake to shame and “everlasting contempt.” Mark 3:28 contains a warning of Jesus concerning the danger of “eternal damnation.” Jesus says (Matthew 25:46), “And these shall go away into everlasting punishment, but the righteous into life eternal.” The expression “forever and ever” is used thirteen times in the Book of Revelation. Nine times it refers to the existence of God. One time it refers to the duration of Heaven. Once it describes the torment of the devil in Hell, and twice, exactly the same expression (“forever and ever”) refers to the duration of the suffering of the lost in Hell. If the existence of God is forever and ever, then the lost in Hell will be there just as long—for ever and ever.

Hell grows more hellish as eternity marches on. The abyss becomes more dense and fiery. To die would be a happy release, but death will not enter there.

The Bible says, “Whosoever was not found written in the book of life was cast into the lake of fire” (Revelation 20:15). Is anyone reading this tract whose name is not in the Book of Life? Remember that all of us are sinners (Romans 3:23), yet God loves us and has a plan for our salvation (John 3:16). Unbelievers are under condemnation (John 3:18), but Jesus Christ died for us (Romans 5:8), and He is our only hope of salvation (Acts 4:12). Open the door of your heart and receive Him as your Saviour today.