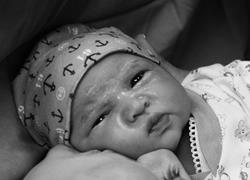 A Voice for the Voiceless

While millions of babies die through abortion, who speaks for them? God does!

Terry (name changed) was thrilled to discover that she and her husband were soon to become parents—until she received the dreadful news that, according to medical tests, the baby would be severely deformed. On the advice of her doctor, she regretfully decided to have the baby aborted, only to discover after the abortion that the baby was not deformed at all. Terry was outraged that a faulty medical test led her to be deprived of the privilege of motherhood, and her story was broadcast on national media.

Kristin could feel the wind whip around her as it mockingly whistled doubt and confusion in her ears. The rustling of the leaves gave her a sense of loneliness and despair, and the pile of leaves at the corner of the tall empty building seemed so typical of the guilt that was piling up in her heart. The doctor's word echoed hauntingly through her head, "It's not a baby yet, just a piece of tissue. Abortion is the right answer for you. How else will you be able to continue your career?" Of course the doctor had to be right, but now she wasn't so sure.

Jennifer's mind numbingly tried to sort through the mountain of advice she had gotten since finding out that she was expecting a baby. "You're not ready for motherhood. A baby is too expensive to care for. What will your friends say? Life hasn't begun yet. Abortion is such a painless route." There seemed to be no end to the voices clamoring in her ears with their advice.

But what are the facts? According to statistics for the United States, every day more than 4,000 babies lose their lives through surgical abortion—almost fifty million lives legally snuffed out between 1973 and 2010 [1], roughly one—third of the present generation! We don't hear their cries. We don't feel their pain. They can't ask for help. So it is relatively easy just to shut out the facts from our minds.

But is it that simple? What about the associated guilt for the parents? What about the emotional trauma? What about the grieving process that's left unfinished because the unborn child was denied humanity—denied even a grave or a marker? Parents are parents, even of a dead baby.

Most importantly, what does God say about the matter?

Does God care about the unborn? He certainly does! God speaks for the unborn and oppressed.

"My substance was not hid from thee, when I was made in secret, and curiously wrought in the lowest parts of the earth. Thine eyes did see my substance, yet being unperfect; and in thy book all my members were written, which in continuance were fashioned, when as yet there was none of them" (Psalm 139:15-16).

"There is a way that seemeth right unto a man, but the end thereof are the ways of death" (Proverbs 16:25).

Maybe you are a victim of another's selfish lust, or possibly you are snared in the web of an immoral lifestyle, or perhaps you intended to remain morally pure, but were caught off-guard by the power of your own passions. Now you face the reality of new life growing within you and you are afraid—afraid of rejection, afraid of the unknown, afraid of the decisions, afraid of the responsibilities and of the future. And abortion seems like a simple option. Afraid to voice your feelings, you wonder, "Does God care about me? Does He have anything to say to me?" He does, and He is also a voice for you. Listen to what He says:

First, it is important to recognize that fornication and adultery are sin, and that no sinner has a promise of eternal life with God. "For this ye know, that no whoremonger, nor unclean person ... hath any inheritance in the kingdom of Christ and of God" (Ephesians 5:5). "Now the works of the flesh are manifest, which are these; Adultery, fornication, uncleanness, lasciviousness, ... and ... they which do such things shall not inherit the kingdom of God" (Galatians 5:19,21).

Second, it is also important to know that God cares about you and your fears. Jesus said in Matthew 11:28, "Come unto me, all ye that labour and are heavy laden, and I will give you rest." Fear is a heavy-handed master, but Jesus Christ wants to share your load and help rid you of your fear. God cares about even the little sparrows that forage about you, and He cares much more about you and your unborn baby—both of you made in His image.

Third, God calls you to come to Him in repentance and faith, confessing your sins and your sinfulness. He is ready to forgive. "Repent ye therefore, and be converted, that your sins may be blotted out, when the times of refreshing shall come from the presence of the LORD" (Acts 3:19). "In whom we have redemption through his blood, the forgiveness of sins, according to the riches of his grace" (Ephesians 1:7).

Fourth, God calls you to a new life of holy living. "Neither fornicators, ... nor adulterers, ... shall inherit the kingdom of God. And such were some of you: but ye are washed, but ye are sanctified, but ye are justified in the name of the Lord Jesus, and by the Spirit of our God" (1 Corinthians 6:9-11). Even if you have already been guilty of taking a life by abortion, God's mercy and pardon are extended to you if you will reach out to Him in repentance.

Regardless of the circumstances that brought you to the place of considering abortion, please be assured that abortion is not the answer. Sin can never be remedied by committing another sin. Abortion is murder, and God says that murder is sin.

It may be you will need to face life as a single mother, or it may be that putting the baby up for adoption is a viable alternative. In either case, you can be assured that you have taken steps to save life rather than to destroy it. The Lord more than makes up for any ostracism from your friends with the assurance that you have taken His way.

Regardless of current public opinion or any advice of the medical profession that tries to assure you that life does not begin until birth, the tragic, painful truth is that these are real lives being ended, and they have no choice in the matter. God continues to be the voice for the voiceless, and no other voice is as important to hear as His voice. Meanwhile, the fifty million voiceless souls that were not considered worthy of birth will be vindicated by the voice of their righteous and holy Creator.