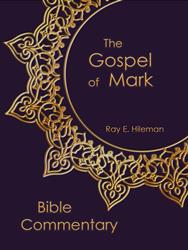 A Commentary on the Gospel of Mark

The Gospel of Mark is a message of hope to Christian believers in the Roman world who were facing severe persecution, and possibly martyrdom. Is this particular Gospel relevant in today's world? Consider this. Christians are tempted to blend into the culture, so as not to be thought of as strange.

Fasten your seatbelts, everyone! We are about to embark on a "whirlwind" journey through the life of our Lord Jesus Christ. I say this because of several unique characteristics of Mark's Gospel.

First, Bible students are generally agreed that Mark is the earliest written Gospel, dated somewhere between 55 and 65 A.D. Both Matthew and Luke borrowed heavily from Mark's account, along with other sources, to compose their Holy Spirit inspired Gospel accounts. In fact, all but 31 verses of Mark are quoted in Matthew and Luke, which is why these three Gospels have come to be known as the Synoptic Gospels (from the Greek, "to see together").

Second, Mark is the shortest of the four Gospels, with only sixteen chapters. Mark's account is short because he was concerned primarily about the deeds and miracles of Jesus. There is very little emphasis on Jesus' teaching in Mark, compared with Matthew, who has five major blocks devoted to Jesus' teaching. By way of contrast, Luke has devoted a large amount of space to recording Jesus' parables. And the Gospel according to John is noted for including a number of Jesus' conversations with individuals and groups, in which He establishes His deity.

The Gospel according to Mark is an action Gospel. Mark's favorite word is "immediately" (or straightway in KJV). In Mark, the reader follows Jesus from one incident to the next, with little time to catch his breath. This is why the symbol for Mark has always been the ox, symbolizing the servant nature of the Messiah. The key verse is Mark 10:45: "For even the Son of Man did not come to be served, but to serve, and to give His life a ransom for many."

Authorship: John Mark is generally believed to be the writer of this Gospel, even though no author is named in the book. He has been accepted as the writer since the second century by early leaders such as Justin Martyr, Tertullian, Clement of Alexandria, Origin, and Eusebius.

We know a little about Mark from the New Testament. John Mark was young when Jesus was crucified and raised from the dead. His mother, Mary, was apparently a well-to-do widow who had become a believer. Many believe her house was the site of the Last Supper as well as the pre-Pentecost prayer session of Acts 1. Some think that Mark may have been the young man who fled naked when Jesus was arrested at Gethsemane (Mark 14:51-52). We know that the church gathered at Mary's house to pray in 44 A.D. when Peter was imprisoned by Herod (Acts 12:12).

In Colossians 4:10, Mark is named as a cousin of Barnabas. This, along with Barnabas' encouraging nature, would explain why Barnabas defended Mark so vigorously to Paul after Mark's failure in leaving the first missionary journey. Mark, like Peter, knew the sting of failure against Christ and His cause, but he also knew the joy of restoration and a second chance.

After Paul and Barnabas parted, with Mark accompanying Barnabas to Cyprus, we learn little more about him, except that he obviously redeemed himself in the eyes of Paul, who later called him "a fellow worker" and said that Mark was helpful to his ministry (Philemon 24; 2 Timothy 4:11). The last we hear of Mark is as a companion of the aged apostle Peter, who calls him a "son" (1 Peter 5:13).

But behind the author is another voice. Most biblical scholars believe that Mark wrote the eyewitness account of Simon Peter. Papias, an early church leader, wrote these words in A.D. 110:

"Mark, who was the interpreter of Peter, wrote down accurately all that he remembered, whether of sayings or doings of Christ, but not in order. For he was neither a hearer nor a companion of the Lord; but afterwards…he accompanied Peter, who adapted his instruction as necessity required, not as though he was making a compilation of the Lord's oracles. So then, Mark made no mistake when he wrote down these same things as he remembered them, for he concentrated on this alone—not to omit anything that he had heard, nor to include any false statements among them."

As we study Mark, we will note details which are not found in the other Synoptic Gospels, where the eyewitness of Peter appears to be coming through. And as we shall see, Peter's failure is highlighted and detailed in the Gospel of Mark, unlike it is anywhere else in the New Testament.

Structure: The Gospel according to Mark is not a biography. Nothing is said about the birth, genealogy, or the early life of Jesus. Instead, Mark concentrates on His public ministry. Mark does this by writing in narrative style, and paying attention to details in an action-packed, vivid, colorful manner. Mark's Gospel is a fast-moving account of Jesus' last years. The focus in Mark's account is on what Jesus did, especially on His miracles.

The book is easily laid out. The climax point comes in the middle of Chapter 8, the mid-point of the Gospel. There Jesus reveals Himself to His disciples and begins to talk frankly about His coming passion, death, and resurrection. Everything moves toward this point, and then out from it. A little over one third of the Gospel is devoted to the last week of Jesus' earthly life. Everything in Mark points to this, with occasional hints of it being given by Jesus early in His ministry (example: Mark 2:19-20).

The four Gospel accounts are important messages. The books before them are anticipatory. The books after them are explanatory. The Gospels tell us a bit of history that we must know, for our soul's eternal salvation depends upon what happened in the earthly life of Christ. They tell of His virgin birth, His sinless life, His countless miracles, His magnificent teaching, His atoning death, His glorious resurrection, His public ascension, and His victorious return.

My prayer, for all who read this commentary—as you use it for Sunday School lesson study, sermon preparation, or as a helpful Bible study tool—is that your own faithfulness, courage, and discipleship will be enhanced as you are encouraged by the example of our Lord and of the many faithful original readers of this Gospel who loved not their lives even unto death (Revelation 12:11).