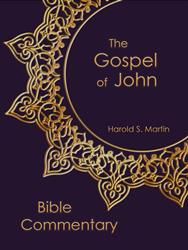 A Commentary on the Gospel of John

The Gospel of John proclaims Jesus of Nazareth as the promised Redeemer of a lost humanity. The content and arrangement of John's Gospel place special emphasis on the deity of Jesus.

Like Matthew, Mark, and Luke—the Gospel of John proclaims Jesus of Nazareth as the promised Redeemer of a lost humanity. The content and arrangement of John's Gospel place special emphasis on the deity of Jesus.

The Gospel according to Mark begins with the public ministry of Jesus. Matthew and Luke begin with His birth, born of a virgin, in keeping with the promise of the Old Testament. John sketches the person and activity of Christ in light of His pre-existence in eternity past.

The writer of the book of John does not identify himself until the end of the book (21:20, 24), where he states that he is "the disciple whom Jesus loved." Early believers regarded John, the brother of James and the son of Zebedee, as the writer. And while his name never appears in the Gospel account itself, there is not much evidence to disprove that John authored the Gospel that bears his name.

John was a man of financial means. He was one of five partners in a fishing business that employed hired servants (Mark 1:16-20). Although not named, John along with Andrew, was a disciple of John the Baptist (John 1:35, 40). It was John the Baptist's testimony that gave this John, along with four others, an incentive to become disciples of Jesus (John 1:35-51). These early disciples accompanied Jesus to the wedding in Cana of Galilee (John 2:2, 11). It seems that then John went back to his fishing business in Galilee—but sometime later, Jesus officially called him to leave his business, and he became one of the twelve apostles. John was an eyewitness of what is written in this Gospel.

John had become one of the three most intimate disciples of Jesus. He, along with Peter and James, were with Jesus when He healed the daughter of Jairus, and when He was transfigured before them. The three disciples were close by when Jesus agonized in the Garden of Gethsemane. It was John, along with Peter, who was entrusted by Jesus to make preparations for the Last Supper (Luke 22:8).

There was a headstrong element in John's character, but association with Jesus brought a change in his temperament so that he became a serene and loving man. Earlier in life, he and his brother James wanted to call down fire from heaven to bring revenge on a Samaritan village which had refused to accept Jesus (Luke 9:52-55). Also, John indicated a tinge of bigotry (Mark 9:38), and some evidence of scheming (Mark 10:35-40). It was the power of Christ that changed John so much that he came to be known as "the apostle of love."

The Apostle John, writer of this Gospel, seems to have lived in Jerusalem (in Judea) for a number of years, and then, according to a well-established tradition, the final years of his life were spent in Ephesus, where he lived to an old age. John wrote the Gospel, the three epistles of John, and the book of Revelation. It was this John who was banished on the island of Patmos (Revelation 1:9). It is generally agreed that the date for the writing of John's Gospel is about A.D. 90.

John also emphasizes the humanity of Jesus. He speaks of Jesus as having been tired, hungry, troubled, loving, brave, and loyal to His friends. Jesus, who was the God-man, was functionally subordinate to the Father who sent Him into the world. He was obedient to the Father, and He always did the Father's will, even unto death on the cross.

It is from the Gospel of John that we decide the length of Jesus' public ministry. John mentions at least three Passover journeys, and refers most likely to a fourth Passover (although the feast named in John 5:1 is not clearly identified as the Passover). The Synoptic Gospels mention only one Passover in connection with the ministry of Jesus—the one at the time of His crucifixion.

John mentions a Passover already in 2:13; another feast (most likely the Passover) is mentioned in 5:1; an additional Passover is named in 6:4; and a final Passover is recorded in 11:55. The public ministry of Jesus is usually considered to be about three years in length. If we were limited to the information in the Synoptic Gospels, we may conclude that His public ministry only lasted one year.

The second year of Jesus' public ministry included the choosing of the Twelve, the preaching of the Sermon on the Mount, and the feeding of the Five Thousand.

The third year of our Lord's ministry witnessed the transfiguration of Jesus, the giving of the parable of the Prodigal Son, and the raising of Lazarus from the dead. Each Gospel writer devotes much space to the final week of Jesus' life leading up to His crucifixion and resurrection.

John's Gospel was written later than the Synoptic Gospels. The writer assumes that his readers are familiar with those other Gospel accounts. John contains much material that is not in Matthew, Mark, and Luke.    When we read on into John, we sense at once a change in the atmosphere. John is more theological, and also tells more about the early ministry of Jesus in Judea. In John's Gospel, there are heights and depths which are far beyond man's understanding. Yet there are plain lessons in the chapters of this Gospel which all believers should treasure.

The Gospel according to John describes seven "signs" (called "miracles" in the KJV) that Jesus performed to authenticate His claim to be God's Son. Each of the signs is recorded in John's account.

The book closes by describing an unusual breakfast on the west shore of the Sea of Galilee (21:12-13), where Jesus interviewed Peter and gave him an opportunity to reaffirm his love for Jesus after his denials (21:15-17). Peter repented and was reinstated into fellowship with God.

John makes clear his purpose for writing the Gospel (John 20:31). It was written "that you may believe that Jesus is the Christ, the Son of God, and that believing you may have life in His name." John accomplished his purpose by listing the seven "I AM's" in the account; by the seven miracles which were chosen as "signs," and by the many titles that were assigned to Jesus. Several of the titles are listed in the first chapter of the John's Gospel.

May each reader not only be familiar with the contents of this Gospel, and be able to quote some of its verses, but may each have a personal encounter with the Son of God.