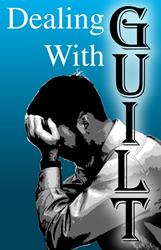 Guilt is a heavy burden, more of a load than any human can carry. Can it be buried? forgotten? avoided? How shall the guilty cope with the invisble burden of guilt?

An American veteran of the Vietnam War dealt with his guilt by leaving a picture of a Vietnamese soldier accompanied by a young pig-tailed girl at the Vietnam Veteran’s Memorial in Washington D.C. With the picture was a note: “Dear Sir, for 22 years I have carried your picture in my wallet. I was only 18 years old that day we faced one another... Why you didn’t take my life I’ll never know. You stared at me so long, armed with your AK-47, and yet you did not fire. Forgive me for taking your life. So many times over the years I have stared at your picture and your daughter, I suspect. Each time my heart and my guts would burn with the pain of guilt... Forgive me, Sir.”1

This man struggled for years with the guilt of killing his “enemy.” Many other soldiers have experienced similar feelings. In recent years, some researchers and counselors are breaking a long-standing taboo by confronting and talking about the guilt that many soldiers experience after killing in combat. By facing the fact of guilt squarely, they hope to reduce the post-combat trauma experienced by soldiers—and, presumably, make it easier for those soldiers to continue killing in the line of duty.

Guilt is one facet of man’s God-given sense of morality. When we sin, we feel badly. The effects of guilt can vary from a slight twinge of conscience when doing something wrong to deep depression and even suicide. But is it correct to deal with guilt by encouraging soldiers to find comfort in the assumption that they are fighting for a cause that is “morally sound”? Is it moral to find justification for killing from Old Testament passages while ignoring Christ’s teachings in the New Testament? No. That is the wrong way to deal with guilt. While reasoning around an issue may take away the mental anguish caused by wrongdoing, it does not take away the guilt or the responsibility before God for what one has done.

The Bible teaches that the wages of sin is death (Romans 6:23). Adam and Eve learned this when they experienced spiritual death through sin.

The atonement for sin and guilt is also death. Since God is holy and cannot stand sin, there must be a way to atone (make amends) for our sins if we want to please Him. Under the old covenant, godly descendants of Adam and Eve sacrificed animals to please God. At the Day of Atonement, the priest killed a bullock to atone for his own sin and a goat to atone for the sins of the people. In this way, the people could be “clean from all [their] sins before the Lord” (Leviticus 16). But that was an annual occasion. And every time, this would bring back a remembrance of sins. It did not take away the guilt.

Today, under the new covenant, the death of Jesus Christ brings reconciliation with God and atonement for the sins of those who repent (which includes confession and a change of behavior) and reach out in faith to Him (1 John 1:9; Romans 5:1–11). Not only can we receive reconciliation and atonement, but this sacrifice also takes care of the conscience defiled by sin (Hebrews 9:14). The offering of Jesus is once and for all, not an annual occasion. To those who receive the sacrifice, God promises, “Their sins and iniquities will I remember no more” (Hebrews 10:17). Both the sin and the guilt are gone, taken care of by the death of Jesus Christ.

Has the anonymous Vietnam veteran who carried the picture of the man he killed in combat reached out in faith to receive the sacrifice of Christ for his sin? I don’t know. But if he does, he can receive both atonement for that heinous sin and freedom from the resultant guilt.

This, of course, does not negate the duty we have of making restitution where possible to those we have wronged. Restitution restores relationships with our fellow man. And confessing our faults one to another provides accountability and a deterrent for sin that can come in no other way. But only God through the sacrifice of Jesus Christ can truly take care of sin. That is the right way to deal with guilt.