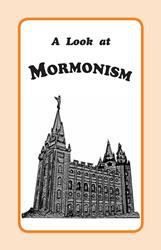 A Look at Mormonism

A concise writing that explains the beginnings of Mormonism and examines several of their basic beliefs, comparing the things they profess to believe with the Word of God, and ends with a plea to any who hold this erroneous doctrine to choose the only way to God: His Son Jesus Christ.

Who are the Mormons? What do they believe?

I have many Mormon friends. I worked with some of them for a year. They were friendly, hospitable, and dedicated to their families. They lived economically. They refused tobacco, alcohol, tea, and caffeinated drinks. The youth planned to serve eighteen months as missionaries, paying their own expenses.

Generally, I admire the Mormons’ lives. Their religious zeal amazes me. But I wish they had as much zeal to know the truth as they have to proclaim their beliefs. And I wish they understood their religion thoroughly.

You may wonder: Why do I wish that?

I wish that because they are my friends. And it seems to me they have not been told the whole truth about their religion. For this reason I would like to share the truth. In this small tract I will touch on only a few points about Mormonism. I will try to choose the points that expose truths that have been hidden from many Mormons.

In his writings, Smith also tells how in 1827 he received some gold plates from a heavenly messenger named Moroni. As he goes on to say, Moroni0 also gave him the stones “Urim and Thummim.” Somehow, Smith used these two stones to translate into English “The Reformed Egyptian” that was inscribed in the golden plates. Supposedly Smith returned the gold plates to Moroni. Because of this no one can verify his translation.

The first translation was published in 1830 as The Book of Mormon. On the sixth of April of the same year the movement was organized which was later called The Church of Jesus Christ of the Latter Day Saints.

Shortly afterward, the nucleus of this church moved from New York to Ohio. Why? Because Smith and his revelations were extremely unpopular among those who knew him well and considered his new religion a hoax.

In Ohio, opposition soon developed to the point of violence and bloodshed. Smith and his Mormon friends eventually moved to Illinois and built a new city there, populated by Mormons.

In 1844, Joseph Smith and his brother Hyram were imprisoned in Carthage, Illinois to await their trial for destroying an anti-Mormon publication. But in June 27 of the same year, some 200 persons attacked the prison and brutally murdered the two Smith brothers, forcing upon their heads the undesired crown of martyrdom. After that, most Mormons accepted Brigham Young as their leader. (Not all accepted Young, and they divided into several groups, which still exist today. In this tract we will consider the group that followed Young, since this group is the largest and most influential.)

Facing increasing opposition (especially against their practice of polygamy), Young led a band of Mormons in 1847 to the Great Salt Lake Valley, which is now in the state of Utah. There he served as second president of the church until his death in 1877. A capable leader, Young greatly contributed to the growth of the Mormon church.

The Mormons accept the Holy Bible as part of the Word of God, “insofar as it is correctly translated.”1 Their authorized scripture also includes: Doctrine and Covenant, The Pearl of Great Price, and The Book of Mormon. Mormons call The Book of Mormon “another testament of Jesus Christ.” (That is, another besides the New Testament of the Holy Bible.)

The Book of Mormon narrates the story of two civilizations. Supposedly one of these traveled from Jerusalem to South America around 600 B.C. This group eventually divided into the Lamanites and the Nephites. Because the Lamanites were so wicked, they were cursed with dark skin. According to The Book of Mormon, Christ visited America, revealed Himself to the Nephites, preached the Gospel, and instituted baptism and communion.

Can we accept the sacred books of the Mormons?

No! They have no historical backing for the statements about the Nephites and the Lamanites. Besides, these books contradict many points of clear Bible teaching. The Bible says:

But though we, or an angel from heaven, preach any other gospel unto you than that which we have preached unto you, let him be accursed.2

The Mormon Scriptures Do Not Agree

I could give you many examples of this, but one will be enough. On one hand, The Book of Mormon prohibits polygamy (the custom of a man having more than one wife):

Wherefore, my brethren, hear me, and hearken to the word of the Lord: For there shall not any man among you have save it be one wife; and concubines he shall have none; for I, the Lord God, delight in the chastity of women. And whoredoms are an abomination before me; thus saith the Lord of Hosts.3

On the other hand, other Mormon scriptures allow polygamy:

History confirms that the first Mormons permitted polygamy. Many Mormons, including Joseph Smith, had more than one wife. Not only that, but Joseph Smith himself also affirmed that what he had written was an eternal covenant, and everyone that would not obey would be punished eternally:

For behold, I reveal unto you a new and an everlasting covenant; and if ye abide not that covenant, then are ye damned; for no one can reject this covenant and be permitted to enter into my glory.5

How can you obey that which contradicts itself?

Besides these contradictions in their “inspired revelation,” the Mormons faced another problem. In 1862 the U.S. Congress passed a law prohibiting polygamy. But the Mormons in Utah wanted to join the Union. So in 1890, they finally yielded. In that year the Mormon president, Wilford Woodruff, issued the famous “manifesto” that prohibited polygamy. Now we would say he was going in the right direction; but he annulled a covenant which, according to Joseph Smith, was everlasting. Thus he fell under the condemnation of the sacred scriptures of this church of which he was president.

This should be enough to convince us that the Mormons’ sacred scriptures are not inspired by God. Moreover, many times they contradict the clearest and most important teachings of the Bible, the true Word of God. Let’s look at a few examples of this.

Their Doctrine of God

What do the Mormons say about God?

God himself was once as we are now, and is an exalted man.6

In the Heaven where our spirits were born, there are many Gods, each one of whom has his own wife or wives which were given to him previous to his redemption, while yet in his mortal state.8

When our father Adam came in the garden of Eden, he came into it with a celestial body, and brought Eve, one of his wives, with him. He helped to make and organized this world. He is MICHAEL, the Archangel, the ANCIENT OF DAYS! about whom holy men have written and spoken—HE is our FATHER and our GOD, and the only God with whom we have to do.9 (Emphasis in the original.)

The Mormon scriptures also teach that different gods inhabit the universe. These gods have spiritual children who clothe themselves with physical bodies and live on the different planets.

Now let’s summarize the teachings of the above quotes:

Is this what the Bible teaches? Are there many gods? Can we become gods? What does the Bible say?

Before me there was no God formed, neither shall there be after me. I, even I, am the LORD; and beside me there is no saviour.10

But they which shall be accounted worthy to obtain that world, and the resurrection from the dead, neither marry, nor are given in marriage.13

Their Doctrine of Jesus Christ

When the Virgin Mary conceived the child Jesus, the Father had begotten him in his own likeness. He was not begotten by the Holy Ghost. And who was the Father? He is the first of the human family; and when he took a tabernacle (body), it was begotten by his Father in heaven, after the same manner as the tabernacles of Cain, Abel, and the rest of the sons and daughters of Adam and Eve. . . . Jesus, our elder brother, was begotten in the flesh by the same character that was in the garden of Eden, and who is our Father in Heaven.14 (Emphasis in the original.)

This twisting of Biblical revelation fits with the Mormons’ erroneous teaching of a god of flesh and blood. In their opinion, Adam was Jesus’ father, and Jesus was conceived by normal sexual relations between Mary and Adam. Thus the Mormons reject the following Bible truth:

Behold, the angel of the Lord appeared unto him in a dream, saying, Joseph, thou son of David, fear not to take unto thee Mary thy wife: for that which is conceived in her is of the Holy Ghost.15

The Mormons also teach that Jesus is Lucifer’s older brother.16 They teach that Jesus married Martha and Mary, Lazarus’ sisters, besides the other Mary whom He loved. They affirm that by means of these women Jesus could have seen His seed upon the earth before His crucifixion.17

Their Doctrine of Redemption

Brigham Young declared that the sacrifice of Jesus Christ was not sufficient to take away some sins. Young invented the doctrine of redemption through the blood of man. He said that what the blood of Christ could not cleanse, the blood of man could!

There is not a man or woman, who violates the covenants made with their God, that will not be required to pay the debt. The blood of Christ will never wipe that out, your own blood must atone for it. . . . I could refer you to plenty of instances where men have been righteously slain, in order to atone for their sins. . . . This is loving our neighbor as ourselves; if he needs help, help him; and if he wants salvation and it is necessary to spill his blood on the earth in order that he may be saved, spill it.18

In one of their official publications, the Mormons say:

Christians speak often of the blood of Christ and its cleansing power. Much that is believed and taught on this subject, however, is such utter nonsense and so palpably false that to believe it is to lose one’s salvation.19

The truth is that the Lord Jesus, the Savior of all who believe on Him, is unique. He offered Himself as an eternal sacrifice for all sin. He offers salvation to all men, not by any human effort, but only by grace through faith. The Saviour of the New Testament exists eternally, for He is God.

For by grace are ye saved through faith; and that not of yourselves: it is the gift of God: Not of works, lest any man should boast.21

Their Doctrine of Universal Salvation

Mormons believe in universal salvation that all men will be saved, but each one in his own order.22

But the Bible clearly teaches that not all men shall be saved. At the end of time, the unbelievers and disobedient “shall go away into everlasting punishment: but the righteous into life eternal.”23

Dear reader, there are many false religions. Mormonism is only one of them. From the Bible, I offer you the only way to God: Jesus Christ. Those who follow Christ:

The decision is yours. Where will you put your faith? Put your faith in Christ, the One who said:

I am the way, the truth, and the life: no man cometh unto the Father, but by me.24