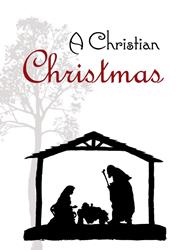 We live in a society of extremes. Although there are many lights, people still live in “darkness”. There are frenzied shoppers in financial bondage, while others do not observe Christmas, insisting that it is wrong because of all the ado. Still others are out buying gifts because “they have to”.

We live in a society of extremes. Although there are many lights, people still live in “darkness”. There are frenzied shoppers in financial bondage, while others do not observe Christmas, insisting that it is wrong because of all the ado. Still others are out buying gifts because “they have to”.

Where do God’s people fit into the picture? How should we celebrate Christmas?

I’d like to first of all consider several historical facts of Christmas and the celebrations that tie into it. The observance of Christmas was started by the Roman Catholic Church as a substitute for a pagan celebration. The purpose was to offer people an alternative to the wild and wicked parties of the pagans. This effort, while noble, was not exactly effective and the tendency was for people to combine the best of both worlds into something that fit their taste. By the 17th century, the Puritans in England and the English colonies in America banned the observance of Christmas, because they felt it had become a season best known for gambling, flamboyant public behavior, and over-indulgence in food and drink. Due in part to the Puritan’s objection of Christmas, the day was usually a normal work day. But times were changing! With the rapidly expanding industrial economies of the 19th century, a new middle class of people was developing. It was a group of people with strong work ethics, and high family values, a group of people who valued home and family life, a people who viewed Christmas as a way to draw family together. A few commercial innovations such as department stores and mass advertising transformed the Christmas holiday into the large commercialized event that it is today.

But what really is Christmas all about? Is it really just about family and togetherness? Or is there something more, something deeper, something more certain and stable than human relationships?

Christmas is a time to reflect on the Gift that God gave to man when His son Jesus Christ came to this world as a baby. Luke 2 records part of the experience of Jesus carried to the Temple for the first time as an eight day old infant. Simeon, the elderly man who frequented the Temple took Jesus up in his arms saying: “for mine eyes have seen thy salvation, which thou hast prepared before the face of all people; a light to lighten the Gentiles, and the glory of thy people Israel.” Simeon recognized two gifts in Jesus; the gift of salvation, and the gift of light - without either of them we would live a very miserable life. Salvation is deliverance from the power and effects of sin. Salvation is the opportunity we all have to break the vicious cycle of sin, guilt, and then self-justification which leads us to more sin and guilt, becoming a never ending spiral downward. Jesus came to this earth to bring us God’s gift of salvation! Imagine yourself living in a world of total darkness, where you could never see the dangers and the pitfalls in the road ahead of you, where you couldn’t even see which the right road to take is. Light reveals truth, and Jesus came to reveal the Truth to us. He came as a light on our path; His life and ministry on this earth teach us about how God wants us to live, and the dangers on the road of life.

But so what! How does a little baby born 2,000 years ago have any effect on my life today? Well, we need to get back to the question “What is Christmas all about?” and realize that the story doesn’t end with Jesus” birth, or with His ministry here. The story continues today because God is calling people to a work. I would like to consider a man who lived after Jesus’ time, a man who hated Jesus, a man who hated anyone who identified with Jesus. Saul was on another journey, determined to destroy these followers of Jesus. As he travelled down the road towards Damascus, he heard a voice calling his name, “Saul, Saul”! The Bible tells us that Saul fell to the ground, crying out, “Who art thou, Lord?” Jesus answered him, “I am Jesus whom thou persecutes.” So here lies Saul on the road, looking up to the one that he has hated, while Jesus looks down on Saul. And Jesus says, “Get up Saul, I want to make you a Christian, and I want to make you a preacher.” Now if that isn’t a change of direction! Saul, who had set out to kill the Christians, is about to be made into one himself! But that is what Jesus is all about! He came to break the bondage of sin, to shine the Truth into the hearts and lives of people, to show them that there is a better way! Jesus continued to speak to Saul, telling him he wanted to use him to “open their [people’s] eyes, and to turn them from darkness unto light, and from the power of Satan unto God, that they may receive forgiveness of sins, and inheritance among them which are sanctified by faith that is in me [Jesus].” Now it is easy for us to shrug our shoulders and say, well we are not Saul so what does that have to do with me? In 1 Peter 2:9- 10 we read “But ye are a chosen generation, a royal priesthood, an holy nation, a peculiar people; that ye should show forth the praises of him who hath called you out of darkness into his marvelous light; which in time past are were not a people, but are now the people of God: which had not obtained mercy, but now have obtained mercy.” Because of Christ Christmas becomes a wonderful opportunity for the Christian to tell the world that there is HOPE! There can be JOY! There can be PEACE! All those things we say so quickly and easily, and maybe never know the feeling of personally experiencing them.

To many people, Christmas is about self. Sure we think of family and friends, but if we are really honest with ourselves, we are in it for what we can get! But God has another way. By His own example, He shows us that the world is better because of giving and not because of getting. And I believe that God wants you to be His messenger to tell others about the Real gifts at Christmas.

The message that we, as Christians should be carrying this Christmas is similar in many ways to the one that Jesus brought at His birth. We too should be giving the gift of the knowledge of salvation, telling others that it is possible to break the cycle of sin and to live in victory. What better gift could we give, than to give Light to someone who is lost in darkness? Light is a unique thing; it is not scared of darkness; it is not scared to be different; it simply does what it was created to do - expose truth. Light reveals; light helps us to see what is really in front of us, unlike darkness which blinds us from the truth and conceals the reality. Matthew 4:16 tells us about the people of Jesus day: “The people which sat in darkness saw great light; and to them which sat in the region and shadow of death light is sprung up.” This sad picture of humanity is so much like many people today, people who have accepted the darkness as a way of life. As Christians, we have a God-given duty to shine the Light of God’s Word on the hearts of people and show them that darkness does not have to be a way of life. It is possible to live in the Light!

Because John the Baptist understood this, he wasn’t going to just sit around letting people feel comfortable in the darkness. Luke 3:7-9 tell us that he preached boldly to the multitudes, telling them about Jesus. One of the things that John preached to the people was the need to live lives of worth. “Bring forth… fruit”, he said, and a life of worth is one that focuses on giving instead of getting. Deal with your problems, John preached; take the axe to root of the issue and stop just making the surface appear good.

Sometimes we are scared to speak out and to challenge others, but there is a better way! It is much better than Santa Claus and expensive gifts! It’s the Way of Salvation! Romans 1:21 tells us that people who know God, and yet are ashamed to glorify Him as God, live a life of increasing darkness. None of us want that. In 2 Corinthians 4:6, Paul says we preach (tell) because God has blessed us with the gift of Light, and we want to give that Light to others! We all have experienced the life of darkness.

Ephesians 5:8 says, “For ye were sometimes darkness, but now are ye light in the Lord: walk as children of light:”. Philippians 2:16 reads, “Holding forth the word of life; that I may rejoice in the day of Christ, that I have not run in vain, neither labored in vain.”

So what is it that makes a Christmas “Christian”? isn’t it you and I? We can become consumed with the “getting” of our world today, or we can become consumed with “giving” the knowledge of salvation to some lost soul. Many people are longing for a ray of hope, a bit of peace, some truth to base their life on, something – anything - to make them feel accepted. They may be in the hospital with no family to care for them; they may be a next door neighbor whose health is failing; they may be some friend who is facing a hardship in their life, or some poor soul you passed on the street. But they are all souls like you and I who need to know that salvation is come for all people!

What are you going to do this Christmas season? Will it be Christian? Or are you satisfied to go on in darkness?