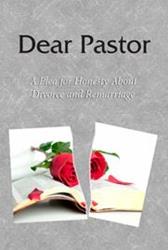 Roughly one million divorces are filed in the United States every year. Since a majority of U.S. citizens profess some form of Christianity, it follows that most of these divorces are filed by those who would say that they worship the God of the Bible.

Roughly one million divorces are filed in the United States every year. Since a majority of U.S. citizens profess some form of Christianity, it follows that most of these divorces are filed by those who would say that they worship the God of the Bible. Ironically, it is this same God who declares in Malachi 2:16 that He hates divorce.
Could we rightfully conclude that God is angry with America, and especially with Christians in America, for doing so blatantly the very thing He hates so much? Could we conclude that we have been “treasuring up wrath” to ourselves because of the atrocities we’ve been committing against our spouses and children? If so, is there still time for us to repent? If there is, what exactly would that repentance look like?
_____________________

If you are a person with questions about what God says regarding divorce and remarriage, then I sincerely hope that this book can be a help to you. If you are a Christian and live in America, this subject very likely affects you in some way or another. Even if you personally have not been divorced and/or remarried, you probably have family members or fellow church members who have been.
But I am especially writing this book for you if you are a pastor. Many sincere Christians have honest questions about divorce, and even more of them about remarriage. While some of these individuals will study the Bible themselves to see what it says about this subject, most of them will not.

Instead, they will rely on the answers that you, their pastor, give them. There is therefore a great weight of responsibility resting on your shoulders, a responsibility for which one day you will give account to God.

The frightening reality is that during the last several decades there has been a complete about-face in the attitude of our society, including the Christian society, about divorce and remarriage. This can only mean that there has been a radical shift in the answers that pastors have been giving to their congregants about this subject.

The question we must ask ourselves is this: has this revolution brought us closer to or further from the will of God? Is God pleased or displeased with the changes He sees in society as a whole, and especially with the part of society that names the name of Christ? If He is displeased, how soon and how severe will the judgment be that He brings? And, finally, how much of the brunt of that judgment will be borne by the pastors who have helped lead God’s people down the path we are now walking?
_______________________