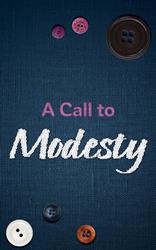 A Call to Modesty

Who or what dictates the style of clothing you wear? Has God shared any thoughts on this subject? Yes, He has! The world needs to see people whose lives—and clothing—show obedience to the standards that God has put in place for His people.

In our day exposure of the human body seems to be an accepted way of life. On the billboards, on the streets, at the office, on the job site, in the classroom—everywhere we turn, men and women display their bodies for anyone to see, apparently with no sense of shame.

In view of such shameless immodesty, is it any wonder that in our society

– 65% of high school seniors have had sexual relations.

– every 4 minutes an arrest is made for sex offenses.

“Oh,” some might say, “that can’t all be blamed on the way people dress. Our society is filled with lust and perversion.” True enough. But immodesty and lust are two sides of the same coin.

Has immodesty become so commonplace that we cannot admit what it does to us? Who sets our standards?

Who tells us the kinds of clothes we should wear? Why do we choose certain styles and avoid others?

Those who follow the standards of friends, styles, and stars may think, I’m not out to seduce anyone. If other people whistle or make wisecracks, that’s their problem, not mine. Such rationalizing may silence their consciences. But it doesn’t keep them from being a corrupting influence on others, and it doesn’t remove their accountability to God for violating His standards.

What are God’s standards?

“I will therefore that men pray every where, lifting up holy hands, without wrath and doubting. In like manner also, that women adorn themselves in modest apparel, with shamefacedness and sobriety; not with broided hair, or gold, or pearls, or costly array; but (which becometh women professing godliness) with good works” (1 Timothy 2:8-10).

Imagine what a different world this would be if men everywhere were holy and prayed regularly and women conducted themselves discreetly and dressed without display.

What would the statistics be on sexual relations before marriage, illegitimate births, sexually transmitted diseases, and rape?

What do the preceding verses tell us about God’s standards for appearance and conduct?

1. God wants people to be holy. Dress is an expression of the heart. Make no mistake: the moral problems in our society are NOT a simple matter of how people dress. Dressing immoral people in modest clothing would not solve the root problem. Immodesty and lust are with us because people’s hearts are not right with God, so the first step in cleaning up immodesty is cleaning up the heart.

2. God wants people to be pleasing in their appearance. The Greek word translated modest means “orderly” or “decorous.” There is no virtue in ugliness or slovenly dress. It is right to be orderly and neat.

3. God wants people to avoid that which is suggestive, seductive, or bold. The call to “shamefacedness and sobriety” forbids the display so common in our society. This instruction is to women in particular because women’s bodies are the focus of lustful men’s attention. Unfortunately, our society proves this daily. Where do men’s eyes naturally go when a woman has a low neckline, a short skirt, a slit skirt, tight slacks, a form-fitting blouse or skirt, or a blouse or dress with V-lines? A woman’s willingness to expose her body or accent her sexual attractiveness does not excuse a man’s lust. The responsibility cuts both ways. Shameless exposure and shameless flirting by either gender cross the guidelines God put in place for our protection.

4. God wants people to avoid an ornamented appearance. Gold, pearls, and “costly array” are the specific items mentioned in these verses. In our society it seems almost inconceivable for women or men not to ornament themselves—their faces, their ears, their eyes, their wrists, their fingers, and their clothing. Why does God forbid this? Because God knows the face is the mirror of the heart, and God wants the beauty of our lives to be deeper than jewelry and makeup.

Just imagine for a moment what it would be like to walk down a street and the only people you saw were people who were holy in heart and who followed God’s standards for their appearance. No immodesty; no ornamentation; neat, orderly dress; faces that mirrored no guilt and hid no lustful desires.

Could we improve such a scene with “gold, pearls, or costly array”?

What are your standards?

Who tells YOU what to wear and how to appear? Have you ever thought seriously about this?

Do social pressures dictate your dress standards? God’s Word says, “Be not conformed [literally, fashioned] to this world: but be ye transformed by the renewing of your mind, that ye may prove what is that good, and acceptable, and perfect, will of God” (Romans 12:2).

Our world needs to see people whose lives show that obedience to God’s will is GOOD. Your life could testify to the goodness of living according to God’s will.

PEOPLE cannot be your standard. Will you follow God in this matter?