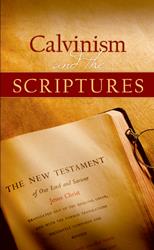 Calvinism and the Scriptures

A thoughtful look at the main points of Calvinistic doctrine, a careful correction of lopsided emphases according to the Scriptures, and a call to follow the One who said, "If ye continue in my word, then are ye my disciples indeed." John 8:31

A minister once visited a seasoned old farmer in a mountain community.

Very soon the conversation turned to spiritual things. The wiry farmer surprised the minister with his knowledge of the Bible.

“I take it you’re a Christian?” queried the minister.

“Nope,” retorted the farmer. “God ain’t saved me yit. He might save me when I’m plowin’ in the field or when I’m sleepin’ in bed. He won’t save me until He gits good’n ready.”

In another community a man and wife were very faithful church members. They wouldn’t miss a service if they could possibly help it. The man held a responsible office in his church for many years.

A family member suddenly became seriously ill. This man and his wife spent weeks taking care of the invalid. They took prescribed medicine to keep awake during those trying days. Both became addicted to the medicine. When the prescription could no longer be filled, the husband contacted drug pushers in a nearby city. His wife turned to alcohol in an attempt to satisfy her craving.

Later a concerned friend visited them and asked about their relationship with the Lord. He was surprised to find both of them “praising the Lord” and claiming victory in their Christian experience!

He cautiously inquired how they could be under drugs and alcohol and still be right with God.

The immediate response was, “I still remember the day I was saved way back in 1949. I know God saved me, and what God does, He can’t undo. Once you’re saved you’re always saved.”

Both of these incidents actually took place. They could have been told about hundreds of other people in hundreds of other communities. Their religious beliefs are commonly accepted by many well-meaning people. Most of them do not realize how un-Scriptural and how dangerous these beliefs really are.

These examples illustrate two beliefs that are part of a system of Bible interpretation called Calvinism.

John Calvin, a Swiss reformer, first set down these ideas in a detailed way. Other men before him had taught the same ideas.

Calvin and his followers have held to five main ideas about salvation in Christ. These are the crux of Calvinistic teaching:

1) Total Depravity. Calvinists teach that man can, in himself, do nothing to respond to God or to come to Him. According to this idea, faith is all on God’s part—not on man’s part. The Calvinist will tell you, “God does it all.”

2) Unconditional Election. Calvinists believe that God decided before the world began who will be saved and who will be lost. According to unconditional election, your eternal destination has been decided. Nothing you may do will change that destiny!

3) Limited Atonement. Calvin taught that Christ’s blood was shed for the elect only—those God planned to save or “elect” to salvation.

4) Irresistible Grace. If God has decided to save you, He will do it regardless of what you do. You can’t resist the plan and power of God. His saving grace overpowers the free will of the elect.

5) Perseverance of the Saints. Anyone who is saved or “elected” by God can never fall away from or lose that salvation—once you’re saved you’re always saved.

You’ll immediately notice that the farmer in the first example above believed strongly in these five points, especially the first four. The other man and his wife were taken up by the fifth point.

Many Calvinists today seem to avoid at least Points 2 and 3 of Calvinism. One Calvinistic minister, when questioned about his belief in the five points of Calvinism admitted, “We believe them all, but we don’t talk about those two.”

Like most other modern Calvinists, his main emphasis is on the fifth point.

Though Calvinists cite certain “proof” verses from the Bible that supposedly teach unconditional election and limited atonement, the testimony of the rest of the Scriptures is so strongly against them that they don’t say much about these points. They “run up against it” when they read such Scriptures as, “Whosoever will, let him take the water of life freely” (Revelation 22:17), and God is “not willing that any should perish, but that all should come to repentance” (2 Peter 3:9).

We know that the Scriptures do mention the “elect” or the “chosen” of God. From the Bible we learn that these chosen sheep of God are those who “hear” His voice and who “follow him” (John 10:27-29). Only those who accept Christ as Lord and Saviour are chosen by God to receive that “power of God unto salvation to every one that believeth” (Romans 1:16).

Many modern Calvinists are embarrassed by several points of their dogma, but they tenaciously cling to the fifth point: the “once saved, always saved” idea. This point is often called “eternal security.”

As with the other points of Calvinism, real problems arise for the supporter of unconditional eternal security. The teaching can be quite dangerous, for it directly influences the way Christians live.

The case of the faithful church member turned dope addict aptly illustrates one of the dangers of this teaching. The man had a false feeling of security while living a very wicked life. Some eternal security people will argue that such a person was never saved to start with. Simple answer. Or is it?

If every sincere believer who turns again to sin was never saved in the beginning, the Scriptures would contradict themselves! The implication of such teaching is that a true Christian cannot go back into sin. This is sinless perfection on earth, which even Calvinists teach emphatically against. Then too, what about the many warnings to Christians from the Bible about “falling away” and disobeying the truth? Why are there such warnings if there is no possibility of falling away?

Consider this: even if we assume for a moment that the unfaithful church member just mentioned were never saved to start with, this teaching got him to the place he would not admit his sinful condition. This “once saved, always saved” doctrine kept this man from ever making the first step toward salvation—to admit that he was a sinner. Whether he was ever saved to start with is not really the issue. His disobedience to God is the issue!

Many advocates of eternal security insist that their teaching will not lead to unfaithfulness to God. They may teach very strongly that good works are important for the Christian—and they’re right! But if you pay careful attention to their sermons, the “musts” of the Gospel get watered down to “it would be better if you would.”

According to this Calvinistic “security” teaching, “good works” for the Christian are not absolutely necessary for his continued security in Christ. The Christian who quits “working” only loses some, or perhaps all, of his reward in Heaven. He still gets to Heaven (supposedly) by the “skin of his teeth.”

An old man once pronounced a telling commentary on this “skin of your teeth” religion: “I don’t want no rewards,” he quipped, “jest so I git to Heaven, that’s all I want.”

Perhaps the hardest question eternal security advocates have to answer is, “What will this teaching lead to?” You can press them on the point, and will usually get them to admit that they believe it’s possible for a person to live a life of sin and still get to Heaven.

Maybe you’ve heard such statements as, “Smoking is a filthy habit no Christian should have. But some people just can’t break the habit. Surely cigarettes won’t keep a person out of Heaven. After all, you’re saved by grace, not by what you do or don’t do.” Or maybe you’ve heard, “It doesn’t matter what a Christian wears as long as his heart’s right. It’s what’s on the inside that counts. Dress doesn’t have anything to do with your salvation.”

If a person thinks that once he is saved he is always saved—that nothing he can do will separate him from God—he could quite easily write off every command of the Gospel with, “Surely that wouldn’t keep you from Heaven” or “You aren’t saved by what you do.”

Friends, we are saved from sin, not in sin!

The whole system of eternal security has been built on a faulty understanding of the Bible and of what God expects of the Christian. Eternal security teachers emphasize the passages of encouragement to the Christian. They very obviously ignore or downplay the passages of warning and the conditions the Scripture constantly sets forth for discipleship.

Eternal security teachers magnify the promise in John 10 that no man will be able to “pluck” us out of the Father’s hand, but seem to ignore the conditions given for sheep just before—hearing His voice and following Him. They emphasize “eternal life” in John 3:16 while ignoring the condition—“whosoever believeth.”

We are convinced that Calvinism, with its current emphasis on eternal security, is a false teaching. There are serious implications and obvious dangers in taking that position.

Let’s look at what the Scripture teaches about salvation in relation to the five points of Calvinism.

1) God created man with a free will so that he may choose to accept or reject God. “[God]will have all men to be saved, and to come unto the knowledge of the truth” (1 Timothy 2:4). “Give diligence to make your calling and election sure” (2 Peter 1:10).

2) Christ died for all men. He was not willing that any should perish. He will save any repenting sinner who comes to Him through faith in His finished work at Calvary. “Whosoever will, let him take the water of life freely” (Revelation 22:17).

3) Man can and must respond to Christ’s call to salvation before he can be saved. He must do these things:

4) We can never earn salvation by any works we can do.

Salvation by God’s grace is a free gift, but man chooses to accept it or reject it. “The goodness of God leadeth [not forceth] thee to repentance” (Romans 2:4).

Satan planned the fall of man, but he needed man’s help to do it. He did not force Adam to sin; Adam fell because he chose to sin. God plans and provides for man’s salvation, but He must have man’s will and cooperation to carry it out.

5) We are secure as long as we remain in Christ. A life of obedience to the teaching of God’s Word—a life of “good works”—is necessary for the Christian to grow spiritually and to remain in the grace of God. “He became the author of eternal salvation unto all them that obey him” (Hebrews 5:9).

The Scriptures teach a day by day walk with Christ and emphasize the necessity of a life of holiness (right living) in obedience to Christ.

Hans Denck, an Anabaptist reformer, summed up this life of obedience to Christ like this: “He who would know Christ truly must follow Him daily in life.”

Satan still tries to deceive men by making them feel secure in their sins. He tells people today, as he told Eve, “Ye shall not surely die.” God’s plain warning still stands: “If ye live after the flesh, ye shall die” (Romans 8:13). God, who cannot tolerate sin before salvation, certainly will not tolerate it after a person becomes saved.