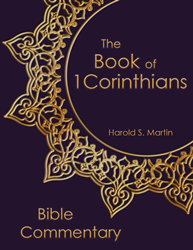 A Commentary on 1st Corinthians

The church at Corinth was established by Paul on his second missionary journey. The book of 1 Corinthians gives us a good picture of the life of the early church. It deals with Christian conduct. It is essentially an epistle of correction.

The letter known as 1 Corinthians was written by the Apostle Paul to the Christians in the church at Corinth. The message is intended for believers everywhere who gather in all places to call upon the name of the Lord.

Corinth is a city in Greece. Paul had been at Athens for a few months toward the end of A.D. 51. Only a few converts for Christ were won there (Acts 17:34). He left Athens for Corinth and found lodging there with Priscilla and Aquila. Paul preached in the synagogue at Corinth with some success, and stayed in Corinth for the better part of two years (Acts 18:11)—longer than in any other city except for his time at Ephesus. Paul is credited with being the founder of the church at Corinth.

All north-south traffic in Greece passed through Corinth; there was no other way for it to go. The greater part of east-west traffic passed through Corinth because the southern tip of Greece was a dangerous area for sailing vessels. And so instead of sailing around the southern portion of Achaia, ships entered the harbor at Corinth on one side of the city; the cargo was disembarked and carried by porters across the isthmus, and placed on another ship on the other side. The brief trip across the isthmus saved more than 200 miles of sailing around the most dangerous cape of the Mediterranean. Today a canal connects the Ionian Sea on the west with the Aegean Sea on the east side of the peninsula.

Corinth in New Testament times was the largest city in Greece. It was populated by many diverse groups of people. There were Greeks who delighted in shallow philosophy; there were priestesses attached to the temple of Aphrodite (the goddess of lust and carnal love); there were Roman families (sent by Julius Caesar to help rebuild Corinth); there were traders from Asia and Italy (seamen and merchants). Multitudes of people from a variety of backgrounds populated the city of Corinth—Romans, Greeks, Orientals, Jews, vagabonds, merchants, fortune-hunters, and pleasure-seekers.

The people who lived in Corinth for the most part were Gentiles. Immorality and drunkenness were rampant in the city. Corinth was the Las Vegas of the ancient world. Undoubtedly the church was impacted by the society in which it had functioned. Most of the converts to faith in Christ came from a pagan background, and numerous problems had developed in Corinth. There were quarreling factions. A case of open immorality had been accepted by the church. Marriage and divorce problems troubled the church. Christians were suing each other before the pagan law courts. There were questions about food offered to idols in the pagan temples. The place of women in the church was causing division—as well as problems related to the Lovefeast, spiritual gifts, and the bodily resurrection of Jesus. At times Paul's authority was being questioned.

Paul addressed the issues that had arisen, and in doing that, he laid down guidelines which have been instructions for the church of Christ down through the years. The things he wrote were approved by God (1 Corinthians 14:37).

Paul had heard about the state of the Corinthian church through some people from "Chloe's household" (1 Corinthians 1:11). Also, the church had addressed a letter of inquiry to Paul (1 Corinthians 7:1). The epistle known as 1 Corinthians is Paul’s response to the church in Corinth in light of those two recent developments.

The book of 1 Corinthians is sometimes contrasted with the book of Romans. Romans is a theological treatise on God’s plan of redemption; 1 Corinthians is a letter calling for upright conduct in the lives of those who have chosen to follow Jesus Christ.

The book of Romans presents the appeal of a new faith; First Corinthians presents an appeal for faithfulness.

To understand and apply the teachings found in the epistle known as 1 Corinthians should be one of the highest goals of every believer in Jesus Christ. The words of this epistle were written not only to the people in the church at Corinth, but to all believers who in every place call upon the name of our Lord Jesus Christ (1 Corinthians 1:2).